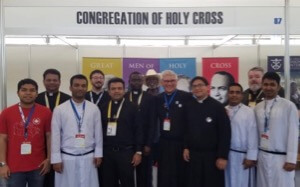 The Congregation of Holy Cross was out in full, international force promoting its life and mission at the Vocation Fair at World Youth Day held in Panama City, Panama, from January 22-26.

Reflecting the universality of the event itself, eleven members of the Congregation from around the world made up the Holy Cross team. They were joined by actor Clarence Gilyard, who is a member of the board of Holy Cross Family Ministries (HCFM), which along with the Holy Cross Mission Center at Notre Dame and the Congregation’s General Administration collaborated on the Vocations Fair.

“Having attended six World Youth Days, I see the value of Holy Cross being present to promote our life when over 300,000 young Catholics are gathered to celebrate their faith,” said Br. Paul Bednarczyk, C.S.C., Vicar and First General Assistant of the Congregation, who coordinated the Holy Cross presence. “Studies have shown that almost 20 percent of the newly ordained and finally professed religious in the United States have attended World Youth Day. I am sure it is similar for other countries as well. Why would we not want to be there?” 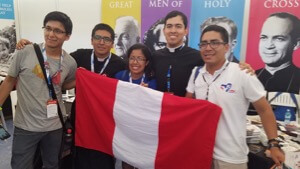 Keeping with the World Youth Day vocational theme of “I am the Servant of the Lord,” the Holy Cross team promoted with banners, brochures, prayer cards, and rosaries the unique vocations of four great servants in Holy Cross: St. Andre Bessette, Blessed Basile Moreau, Venerable Patrick Peyton, and the late and beloved Archbishop Marcos McGrath, who served as the Archbishop of Panama from 1969-94.

“It was impressive to see the number of young people interested in knowing more about the Congregation and their desire to discern their vocation,” said Fr. Pinto Paul, International Director of Family Rosary, which is a part of HCFM. “Thousands of young people came through our booth. We had 10,000 rosaries, and they were gone in two days. It was very engaging and enriching experience. Many of them asked us to pray for them at the booth itself.”

Prayer, of course, plays an essential part in vocational discernment and discipleship, and it played a central part in the witness and accompaniment that the Congregation offered to pilgrims in Panama. 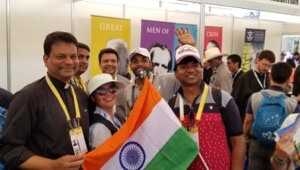 “It was significant for HCFM as we are focused on our mission of helping families pray,” explained Fr. Pinto. “Good vocations come from praying families. So helping families pray is core to vocations in the Church. HCFM mission and work are aimed at inspiring, fostering, and promoting the spiritual well-being of families. So participating in the vocation fair with the theme ‘The Great Men of Holy Cross’ along with some of our wonderful seminarians was a transformative experience.”

Explore Holy Cross around the world 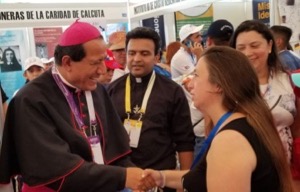 According to one of those seminarians, Mr. Gabriel Fuentes, C.S.C., who hails from Chile, one of the things that drew young people to the Holy Cross area in particular at the fair was the clear diversity among Congregation’s members. The core team of eleven included men from Bangladesh, Canada, Chile, India, Uganda, and the United States. Other Holy Cross religious from Peru and the United States who were on pilgrimage with their local dioceses or apostolates also helped attend pilgrims at the booth. Even the Most Rev. Jorge Izaguirre, C.S.C., Bishop Prelate of the Territorial Prelature of Chuquibamba, Peru, stopped by to welcome and speak with young people.

“During World Youth Day I remembered many lines of our Constitutions: ‘We were already His, for we bore the name of Christians.’ Since were Christians and we were following the same God who had called us, ‘it was a call that came to us from without, but also one that arose up within us, as from His Spirit,’” said Fuentes. “This Spirit moved us to live as brothers, something which caught the attention of others, and many approached to ask: ‘Who are they?’ With pride, we said in our diverse languages, ‘We are Holy Cross priests, brothers, and sisters.’” 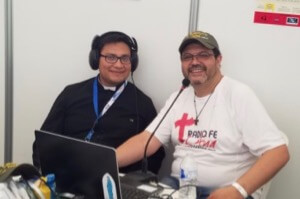 Fuentes also remarked how moving and joyful it was to share and collaborate with his brothers in the Congregation from around the world in presenting to the youth “who we are and we hope to be in Holy Cross.”

Those thoughts and sentiments were shared by Fuentes's fellow seminarian, Mr. Cameron Cortens, C.S.C., who is from the United States yet currently living in Mexico, as he reflected back on his experience in Panama.

“Participating in the Vocations Fair in Panama was an enriching experience for two reasons,” said Cortens. “For one thing, it was an opportunity to get to know more of the Holy Cross family from around the world, including young men in formation from Canada, Bangladesh, Chile, and Peru. The diversity of backgrounds among our team members working together at our Holy Cross booth really gave me a unique experience of the internationality of our Congregation. 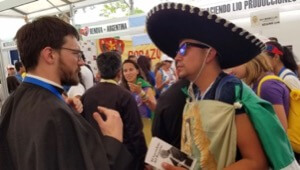 “But for another thing, it was exhilarating to witness the sheer volume of young people passing through the vocations fair with a desire to serve God,” he continued. “At the end of each day my voice was nearly spent from non-stop conversations, but my heart was full of joy for having glimpsed the way the Holy Spirit is already moving within the Church’s young people around the world, and particularly in Latin America.”

Nevertheless, it was not just the young Holy Cross men in formation who were moved by the experience of working together across borders of every sort. The finally professed priests and brothers who were part of the team also remarked how powerful the experience of collaborating at the Vocations Fair was. 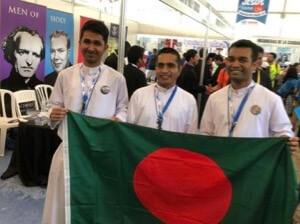 “With the collaboration of HCFM and the Mission Center, we presented an international face of Holy Cross, which included our younger members,” said Br. Bednarczyk. “In our prayer, sharing, and work together, we also created a small community among ourselves. It was a rich experience and blessing for all of us.”