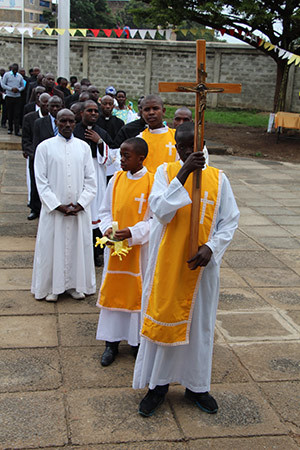 On Saturday, May 21, history was made in the District of East Africa as 10 temporarily professed members made their Final Profession of Religious Vows. It is was the largest group ever to profess Final Vows for the Congregation of Holy Cross in East Africa.

Though the liturgy was significantly delayed because of traffic delays due to the Nairobi Marathon, it was a most joyful and colorful affair.

"Final vows was a great celebration of the decision of 10 outstanding young men pledging their Perpetual Vows within Holy Cross," said Fr. O'Hara. "The Spirit of the hundreds within Holy Cross Church was incredible: singing, dancing and pure joy and pride as the 10 said 'yes' to the Lord!" 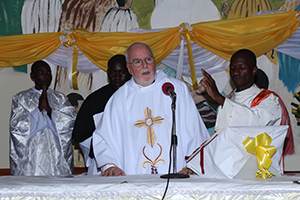 "The Final Vows ceremony was truly an experience of the uniqueness of the District of East Africa in being a mixed district, supported by two provinces and composed of three countries,” added Br. Zaydak. “Families and friends of the professed represented many tribal groups which contributed to the lively spirit of the reception and evening social. I think it also clearly indicated what will be the ongoing support for the commitment of these men, not only from their confreres in Holy Cross, but in the much wider family of Holy Cross.”

Fr. Patrick Neary, C.S.C., Superior of the District of East Africa, commended the 10 men at the end of the Liturgy of Final Profession, not only for being the largest group ever to make Final Profession, but because of their commitment to personal prayer, their strong bonds of friendship and brotherhood, their pride in being men of Holy Cross, and their visible commitment to social justice and to serving the poor. 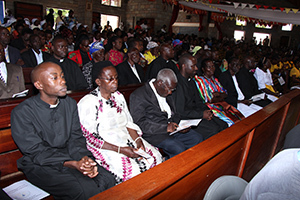 “As the younger face of Holy Cross in East Africa, they represent a class of men well-grounded in the charism and spirituality of Holy Cross, and very conscious of Fr. Basile Moreau’s call to serve God’s people with zeal,” said Fr. Neary.

All but one of 10 men who made their Final Profession hail from Uganda, so this was the first time that many of their family members had experienced Kenya and Nairobi, as well as Holy Cross Parish in Dandora.

The following day, Sunday, May 22, the Most Rev. Jorge Izaguirre, C.S.C., Bishop Prelate of the Territorial Prelature of Chuquibamba, Peru, presided at the Liturgy of Ordination to the Diaconate at Tangaza University College. Of the 10 men who had made Final Profession, nine were ordained deacons. They are: Henry Kajubi, Dennis Lule, Peter Mayanja, Lawrence Mwenya, Oswald Nkyanungi, John Baptist Nsubuga, Richard Nsubuga, Patrick Okuthe, and Robert Ssali. 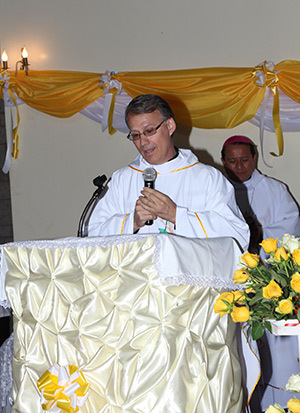 The presence of Bishop Jorge Izaguirre underscored the internationality of Holy Cross and made palpable the wider family of Holy Cross that is present across the globe. It was the his first visit ever to East Africa.

At the Liturgy of Ordination to the Diaconate, Bishop Izaguirre joked that he only knew two Swahili words before arriving in Kenya: Hakuna matata! By the end of his stay, he claimed he had at least quadrupled his store of Swahili words. He left East Africa inspired by the works and the growth of Holy Cross that he witnessed first-hand.