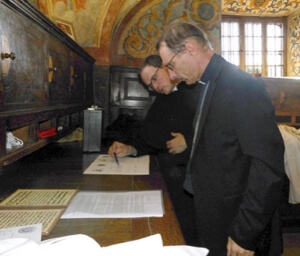 On September 15, 2019, at a special Mass with the Most Rev. Nicolas Brouwet, Bishop of Tarbes-Lourdes, the Congregation of Holy Cross’s Vicariate of France assumed the tutelage of Notre-Dame de Garaison, a school established in the Hautes-Pyrénées located on the plateau of Lannemezan.

In 1515, the Virgin Mary appeared in Garaison to a shepherd woman. A chapel was built on the spot in 1540 and still exists today as a place of pilgrimage.

Fr. Pascal Garçon, C.S.C., was appointed Rector in 2015 of the Sanctuary, which also has a secondary and primary school. After several dialogues with the bishop, Fr. Romuald Fresnais, C.S.C, Superior of the Vicariate, and his Council, with the consent of the Vicariate Chapter, made the decision to incorporate Garaison into the network of schools within the Vicariate.

In his comments at the Mass, Bishop Brouwet stressed the values of a Holy Cross education: “where the Gospel is central … young people give the best of themselves … and where the family spirit and culture of hope is in the hearts of the students." 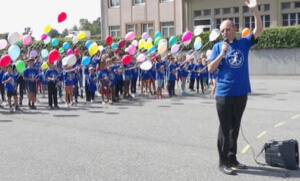 Fr. Fresnais in his remarks thanked the Missionaries of the Immaculate Conception who served the school for over 150 years and expressed his confidence that this new mission of Holy Cross will bear fruit to the young people it serves.

On the following morning, the Head of School, M. José Corteggiani, gathered the school community for an assembly to celebrate their new Holy Cross identity. The teachers and students donned blue t-shirts with the cross and anchors for the occasion.

Among those present was the mayor of the commune of Monléon-Magnoac, a former pupil, who expressed delight in “this new page in the history of Garaison.”

See a photo gallery of Holy Cross's origins in France 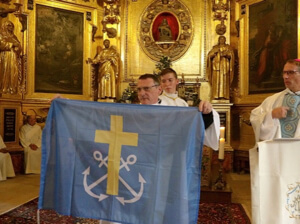 After Fr. Fresnais presented the Head of the School with the new letters of mission, a photo montage of the other Holy Cross schools in France was presented with a reminder of the larger international network of schools in the Congregation. The event concluded with the singing of the hymn of Garaison.

Later, under the Holy Cross flag that now floats at the entrance of the school, a student rugby tournament was held, and fittingly, Garaison won!