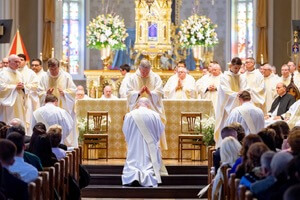 On Saturday, April 7, keeping with its long-standing tradition, the United States Province of Priests and Brothers gathered in the Basilica of the Sacred Heart on the campus of the University of Notre Dame to celebrate its Ordinations to Priesthood. This year, three young men were ordained: Fr. Christopher Brennan, C.S.C., Fr. Brendan McAleer, C.S.C., and Fr. Timothy Weed, C.S.C.

All three men made their Final Professions last year on the Feast of Our Lady of Sorrows, September 15, and then were ordained to the Deaconate the following day.

Since their deaconate ordinations, all three men have been working in fulltime ministry placements. Fr. Brennan has been working on the pastoral staff at Holy Redeemer Parish in Portland, Oregon. Also out in Portland has been Fr. Weed who has worked at the University of Portland, living in one of the residence halls and working in Campus Ministry as the Director of Liturgy. Fr. McAleer has also been serving in Congregation’s university apostolate, working at King’s College in Wilkes-Barre, Pennsylvania. 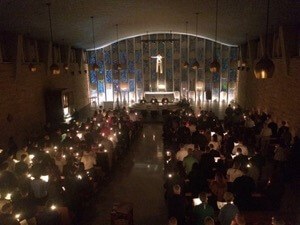 The prayers and festivities surrounding Ordination Weekend kicked off with a special prayer service in the Moreau Seminary Chapel. Known as Lucernarium, the prayer service combines the Church’s Night Prayer with the candlelit vigils of the early Church. It always concludes with a Marian hymn, seeking the intercession of the Congregation's patroness.

Fr. Wilson Miscamble, C.S.C., Full Professor of History at the University of Notre Dame, was chosen by the men being ordained to preside and preach at the prayer service, which included the blessing of the men’s chalices and patens.

In his homily, Fr. Miscamble encouraged the three men to “to be priests who participate in Christ’s shepherding of the People of God. You must be as the one true shepherd, who ‘came not to be serve, but to serve and give his life as a ransom for many.’ Your priesthood must be about serving the priesthood of all the baptized. Pour yourself out. Remember that the priest’s life ‘is not his own.’”

Fr. Miscamble continued, “Each of you sets forth tomorrow on your priestly journey not knowing what combination of joys and sorrows and of successes and disappointments that the future has in store for you. However all that may be, know that tomorrow you will be marked as a priest for life. As such a priest, you receive from Christ the very treasures of salvation so that, whatever the circumstances, you must pour yourself out and distribute them among the people to whom you are sent.

“So many people are in need of spiritual nourishment. They are starving and thirsting for Christ. Meet their hunger. Quench their thirst. Bring them Christ,” Fr. Miscamble concluded.

Read more news about Holy Cross in the United States

Following Lucernarium, there was a social to welcome the many guests in for the Ordination weekend, including not only the three men’s friends, family, and confreres in Holy Cross, but also members of the apostolates in which they have served. 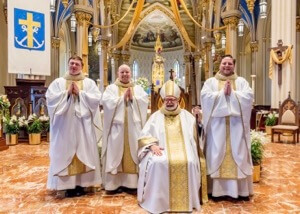 The Ordination Mass was Saturday afternoon at 2 p.m., and the Most Rev. Daniel Jenky, C.S.C., Bishop of the Diocese of Peoria, presided. A member of the United States Province and a frequent presider at Ordinations for the Congregation, Fr. Jenky spoke of the great joy that these three Ordinations bring to Holy Cross and to the wider Church.

At the end of the Mass, that joy overflowed as the packed church erupted into sustained applause as the three men walked down the center aisle and were greeted outside the main Basilica doors by their brother priests.

The celebrations continued for the rest of Saturday with an open reception in the Main Building of Notre Dame, and then a dinner for invited guests later that evening in Moreau Seminary. 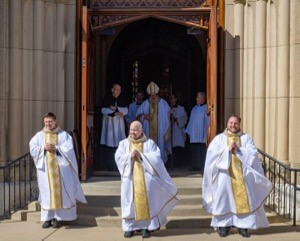 On Sunday, the newly ordained Frs. Brennan, McAleer, and Weed spread out through South Bend, Indiana, to celebrated several Masses of Thanksgiving at the Congregation’s parishes and educational institutions around the city. Many of their confreres in Holy Cross were able to join them to give thanks for their vocations and their future service of God’s People as Holy Cross priests.

Fathers McAleer, Brennan, and Weed will now return to their respective assignments where they will serve now as ordained priests.