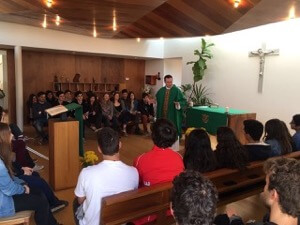 In 2016, the District of Chile of the Congregation of Holy Cross has been celebrating major anniversaries for its two schools in Santiago. St. George’s College has been marking the 80th anniversary of its foundation, and Colegio Nuestra Señora de Andacollo is celebrating 40 years of the presence and ministry of Holy Cross in the school.

“It is a happy coincidence that both schools celebrate together such significant dates,” said Fr. José Ahumada, C.S.C., Superior of the District of Chile and District of Peru. “The bottom line is that both schools represent the commitment that Holy Cross has made to education in its almost 75-year history in Chile. Many children and young people have benefited from this spirit that permeates a Holy Cross education. We want to thank the religious and laity who gave and continue to give their lives for the education of future generations of our country.”

It was St. George’s College that first drew the Congregation to Chile in 1943 when the Archbishop of Santiago invited Holy Cross to assume the administration of the school which specialized in teaching its students English. The school had been founded just seven years earlier, in 1936, by a group of lay Catholics. 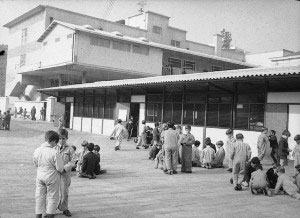 Since the arrival of the first Holy Cross missionaries from the United States, the Congregation has helped grow St. George’s College into one of the most recognized and important educational institutions in the country of Chile. Known for its social consciousness, faith community, and academic standards, St. George’s College has formed many students who have gone on to critical leadership positions in Chilean government and society.

“We are excited to celebrate 80 years as a leading Catholic college in Chile,” said Fr. David Halm, C.S.C., Director of Campus Ministry at the school. “For the vast majority of those years the Congregation of Holy Cross led Saint George’s. Dozens of Holy Cross religious, along with our lay collaborators, have worked to ensure students encounter Jesus Christ here and excel in their academic work. In every way, we continue to live our motto, 'Recte ad Ardua' – straight on into the difficult!”

St. George’s College has woven the 80th Anniversary into the events that mark the school year, including the Semana Georgiana during the week of St. George’s Feast Day, the Día de Chilenidad that celebrates Chilean culture and heritage, and the various retreats for students, parents, and staff. 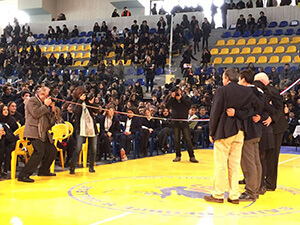 In addition, two big events were planned to mark the historic year. Back on April 20, 2016, St. George’s College inaugurated its brand new Gymnasium with an all-school Mass and celebration. Fr. Ahumada presided at the Mass, which included a blessing of the new facility, which is unique in Chile due to its combination of size and construction. Fr. Thomas J. O’Hara, C.S.C., the Superior of the United States Province of Priests and Brothers, was present for the celebrations.

Then, on November 11, the Old Georgians Association, which is the school’s Alumni Association, is hosting an evening to celebrate the 80 years of the school’s history. All the living former rectors have been invited to attend. The evening will include Mass, at which Fr. Ahumada will preside, followed by a dinner and program. Almost 700 of the school’s dedicated alumni are expected to attend, along with many Holy Cross religious who have served at the school. 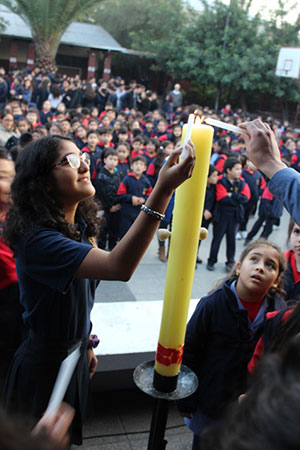 The Congregation’s other sponsored school in Chile, Colegio Nuestra Señora de Andacollo, is celebrating the arrival of Holy Cross to the school in 1976. Holy Cross was given pastoral care of the school after the military government of Augusto Pinochet took over St. George’s College in September 1973.

The school dates back to 1904 when it began as “Andacollo Parochial School” to serve a very poor neighborhood then in the suburbs of Santiago. While the city of Santiago has grown immensely, placing Colegio Andacollo in the older sector of Central Santiago, the school still serves a diverse working class population that each year is marked by more and more immigrants.

The Congregation has helped to grow the academic reputation of the school as well as instill in it the values and spirituality of Holy Cross.

“To celebrate the 40 years of the presence of Holy Cross in Colegio Nuestra Señora de Andacollo is an occasion to give thanks for the enormous contributions to the infrastructure, the academic program, and the spiritual life that the priests, brothers, and sisters of Holy Cross have made in this institution,” said Mr. Luis Marquez, the Rector of the school. 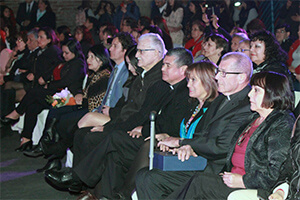 Similar to St. George’s College, many of the celebrations at Colegio Andacollo have been woven into existing events of the year, including in a particular way the Semana San Andrés when the school celebrates the first Holy Cross saint, St. André Bessette, and the wider Holy Cross spirituality that is a part of the school’s heritage. It was also a constant theme in the various missions, retreats, and service projects of the school.

The school also highlighted the Congregation’s presence and role in its yearly Solidarity Gala, in which there was a special recognition of Fr. Roberto Simon, C.S.C., the first Holy Cross religious to serve as the school's rector (1976-1981).

All in all, it has been a great year not only to celebrate the contributions of Holy Cross to the Chilean Church and society through education, but also to look to the future of that mission.

When asked about what has been and will be the significance of the Holy Cross educational mission in Chile, Fr. Ahumada had a simple, yet powerful answer: “Above all, to recognize the living Christ, incarnate in the history of joys and sorrows.” 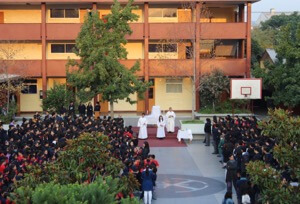 “The road has at times been difficult, because we have not always had the numbers of religious we needed, and also because we were forced by the military government to withdraw for a while from St. George’s. Yet, today we see how from a difficulty may arise an opportunity: We started work in Andacollo College when we had to leave St. George’s,” explained Fr. Ahumada. “These are signs that in the end it is Christ who accompanies us in our schools so that we can be educators that challenge young people to live the gospel with a testimony that will mark them for life.

“Today the challenge for Holy Cross is that new young people see that this service and mission is worthwhile and is a source of much joy. We hope that young people dare to continue the imprint left by their teachers," he said.