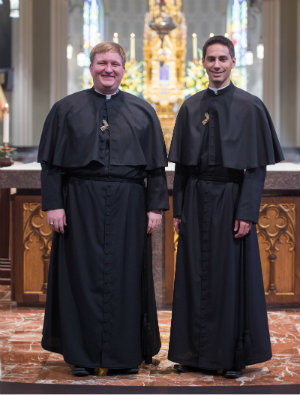 Mr. Dennis Strach II, C.S.C., and Mr. Matthew Hovde, C.S.C., professed Final Vows in the Congregation of Holy Cross on Saturday, August 29. Both men are members of the United States Province. The following day they were ordained deacons, as part of their final preparation to serve as religious priests in the Congregation.

The festivities of the Final Vows Weekend began in earnest on Friday night, August 28, with a prayer service at Moreau Seminary on the campus of the University of Notre Dame in Notre Dame, Indiana. Called “Lucernarium”, the prayer service combines the Church’s night prayer with candlelight vigils from the early Church.

Fr. Michael Connors, C.S.C., Director of the John S. Marten Program in Homiletics at the University of Notre Dame, presided and preached at Lucernarium. In his homily, Fr. Connors reflected on Pope Francis’s call for religious to be men and women of joy.

"We can do no more this weekend than to charge you – plead with you – to live your life in Holy Cross as a life of joy," preached Fr. Connors. "Religious life has as many temptations to counterfeit joys as any other life. Don’t be lulled into them. It is only real, unfeigned joy that can make this a life of freedom and generosity, rather than a life of burden and sacrifice. It is only joy that makes it a life worthy of our baptism, which is to say, worthy of the joyful Christ himself. And it is only joy that makes it possible for us to shoulder the Cross, indeed to embrace it willingly as itself a gift. For it was Jesus’ own joy in his Father’s love that sustained him in the darkness and led him to expect a bright new day."

View Profession of Final Vows Around the World

During the prayer service, Fr. Connors blessed the crucifixes that Strach and Hovde would receive the following day as a sign of their Final Professions in the Congregation. Following Lucernarium, there was a festive social in the garden level of the seminary.

The Mass of Final Profession took place Saturday morning in the Basilica of the Sacred Heart at Notre Dame. Fr. Thomas J. O’Hara, C.S.C., the Superior of the United States Province, presided at the Mass. Before receiving the vows of Strach and Hovde, Fr. O’Hara preached about the “mystery of love,” reminding the two young men to humbly live out their religious life in union with their brothers and sisters in Holy Cross as a loving response to the God who first loved them.

“Dennis and Matt, be these men who so love God, who so much are a part of the brotherhood of Holy Cross that you bring that love to all whom you will serve, and most especially to those in our world who struggle to find love or hope. Thank you for your commitment and thank you for saying Yes today before all of us,” preached Fr. O’Hara.

In addition to the Strach and Hovde families, there were many friends and colleagues of the two men gathered in the Basilica. There was also a large showing of Holy Cross priests, brothers, and sisters. Many of them then gathered again for a celebratory brunch at Moreau Seminary.

Then, on Sunday, August 30, Strach and Hovde were ordained deacons by the Most Rev. Daniel R. Jenky, C.S.C., Bishop of Peoria. The Mass was held in the Chapel of Moreau Seminary. Once again, a celebratory brunch followed in the seminary.

As deacons this year, Strach will be serving at St. Ignatius Martyr Parish in Austin, Texas, and Hovde will be working as an assistant rector at a residence hall at the University of Notre Dame.