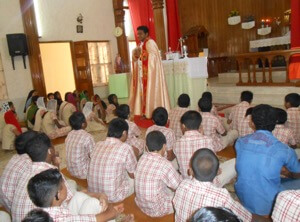 “The deaf hear” – that is one of the signs that Jesus pointed to that the Kingdom of Heaven had broken into the midst of the people. Fr. Biju Lawrence Moolakkara, C.S.C., continues this miraculous work of Jesus, giving the gift of “hearing” the Good News to the hearing impaired in India. His ministry was recently profiled by a local Television Station, which also aired his Mass in sign language on October 10.

Fr. Biju’s work among the hearing impaired in India dates back almost two decades to an encounter with another Holy Cross priest, Fr. Harry Stocks, C.S.C. The two met while Fr. Biju was studying philosophy as a seminarian in Pune.

Fr. Stocks had been doing pioneering ministry for years among the deaf communities not only India, but also in other Asian countries and his native Canada. He was looking specifically for someone to continue the work in India.

Although many religious, including some from other religious communities, expressed interest, Fr. Stocks, after a rigorous training program, selected Biju to continue the ministry. While still in the seminary, Biju would go to schools for the hearing impaired on weekends and holidays to be with the deaf community, not only deepening his knowledge of sign language, but also deepening his connections with the people.

Then, eight years ago when Fr. Biju was ordained a priest on October 29, 2008, he chose to celebrate his First Mass in sign language. Although this decision was hard for some to understand and accept, it revealed his true love for hearing impaired people and his wholehearted desire to serve them. 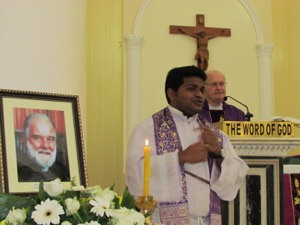 For the last four years, Fr. Biju has based his work out of St. Joseph’s Church, Chengalam, in the Diocese of Vijayapuram. He also regularly spends time at the OLC Deaf High School at Mannakkanad, Pala. From these bases, his work extends to the rest of the state of Kerala, and beyond.

According to Fr. Biju in his interview with the TV station, one of the biggest challenges for hearing impaired Catholics in their spiritual lives is the reception of the Sacraments, especially Confession and the Eucharist. As a result, the first priority in his ministry has been making the Sacraments readily available to them as a means to grow into spiritual maturity.

In India, there are over 60 million hearing impaired people, yet the Church in India has not made an concerted effort to minister to them and share the Good News with them. Fr. Biju dreams of attracting other people to this critical ministry, just as Fr. Stocks inspired him.

He also hopes one day to build a home for the hearing impaired so that they might live together in community, helping address the loneliness in which so many deaf people are forced to live inside standard old age homes. The same facility could also be used as a center to provide an expanded faith formation to the hearing impaired, including marriage preparation and family counseling. 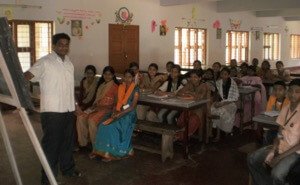 So far, the obstacles Fr. Biju has encountered in trying to realize his dream have been great, yet he does not trudge, but rather strides forward in his work. In true Holy Cross fashion, he trusts that God in his Divine Providence will provide laborers for this harvest, just as God called him, so that the Kingdom continues to break into all corners of the world today.

Special thanks to Fr. Shiju Joseph for translating the original article of Sunday Shalom from Malayalam into English.