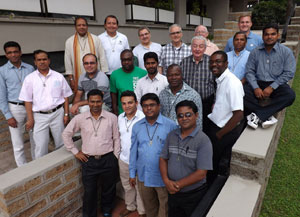 The first session of the second Holy Cross Forum came to a close in Rome this past Saturday, June 8. For the twelve young brothers and priests who attended from around the world, it was a powerful and moving experience of their common brotherhood and mission in the Congregation of Holy Cross.

“Holy Cross Forum II was wonderful and meaningful to us, the young religious,” said Br. Proshanta Ignatius Costa, C.S.C., from the St. Joseph Province in Bangladesh. “What I learned, listened to, and discussed with others during the course of the meeting were very enriching. It has broadened my understanding of Holy Cross and my zeal for mission and ministry in Holy Cross.”

Br. Patrick Baah, C.S.C., from the District of West Africa in Ghana, echoed those sentiments. “This is the first time I have left my country and met other Holy Cross confreres from different sectors. It has been an enriching experience and a great time of renewal for me,” he said. 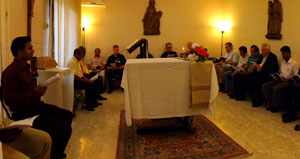 The Forum began Wednesday evening with the participants gathering with the General Administration for prayer and dinner at the Holy Cross Generalate.

The following morning, after Morning Prayer and Mass at the Generalate, the Forum participants along with members of the General Administration visited and toured St. Peter’s Basilica.

Then in the afternoon, the participants introduced themselves and gave presentations on their home Province, Vicariate or District. In addition to speaking about the major apostolates in their jurisdiction, the young priests and brothers also shared about the challenges that they face and signs of hope that they find.

Br. Thomas Dziekan, C.S.C., Vicar General, said that this initial presentation of the Forum – complete with slides, music, and videos – was impressive and moving.

“Most participants, for the first time, became aware of the internationality of the Congregation and the diversity of the contexts and populations in which we find ourselves around the world. All realized how complex we are, but were excited about the challenge of getting to know one another better and to understanding the great possibilities that exist throughout the Congregation in ‘making God known, loved and served,’” said Br. Dziekan.

Explore the 16 countries in which Holy Cross serves today

Friday and Saturday were then dedicated to reflecting on the internationality of the Congregation as well as on the common spiritual heritage and religious life that unites the members of Holy Cross in the many countries and cultures in which they serve. Members of the General Council made several presentations, and time was set aside for personal testimonies, questions, and discussions. 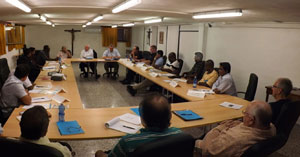 The Forum wrapped up Saturday evening with a conversation on “Envisioning Our Preferred Future.” One of the main goals of the Forum is to include the voices of younger members of the Congregation’s on-going planning process. The purpose of this first session was to lay the foundation for the Forum’s second and third sessions next year in which the participants will examine more deeply with the General Council the issues facing the Congregation as it seeks to fulfill and grow its international mission in the future.

In many ways, that work of fulfilling and growing the Congregation’s international mission has already begun as the Forum participants left Rome inspired and emboldened to return to their ministries with greater zeal.

“It has been a time of blessings for me personally at the Seat of the Apostle Peter,” said Rev. Arokia Sahayaraj, C.S.C., from the Vicariate of Tamil Nadu in India. “The time together with young religious from all the various sectors has helped me enlarge my circle of friends and my knowledge of Holy Cross in various countries and cultures. It has emboldened my zeal for the mission where I am now.”