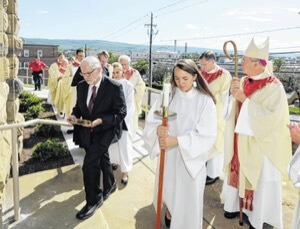 “Enter the gates of the Lord with thanksgiving, his courts with songs of praise.” With these words, the Most Rev. Joseph Bambera, Bishop of the Diocese of Scranton, opened the doors on September 15 to the new Christ the King Chapel on the campus of King’s College in Wilkes-Barre, Pennsylvania, in the United States.

The building is the site of the former Memorial Presbyterian Church, built in the 1870s and closed about 10 years ago.

The Mass of Dedication began with a procession from the college's former chapel to the new Christ the King Chapel. Joining in the procession were the Holy Cross religious, area clergy, college choir, and students. Br. Stephen LaMendola, C.S.C, Outreach Coordinator for the Education Department, carried the relics of St. Andre and Blessed Moreau in the procession. 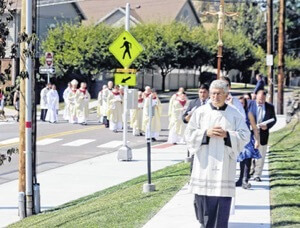 Prior to entering the church, Fr. Jack Ryan, C.S.C., President of King's College, said, “For over a decade, these doors have been shuttered, and the church had fallen into disrepair. We have restored the church to its original grandeur, and today we open these doors with the same invitation: whoever so will, let them come.”

The Mass of Dedication was both a solemn and festive occasion in the beautiful new sacred space. It included the participation of various members of the college community, including the school's choir which sang during the celebration.

Following the Mass, the Holy Cross religious at King’s College gathered in celebration with Bishop Bambera. It was a chance to give thanks together for this great new addition to the College's mission of educating minds and hearts. 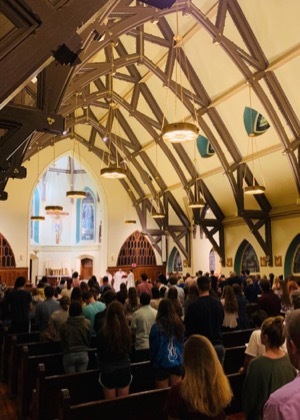 King's College is one of four higher educational institutions administered by the United States Province of Priests and Brothers. Together with its lay collaborators in mission, the Province also administers the University of Notre Dame in Notre Dame, Indiana; the University of Portland in Portland, Oregon; and Stonehill College in Easton, Massachusetts.

The Congregation founded King's College in 1946 at the invitation of the Most Rev. William J. Hafey, then Bishop of the Diocese of Scranton. As the College's website states, through its courses of study, sons of coal miners and veterans returning from World War II were given a broad-based liberal education in the Catholic tradition in order to provide them with intellectual, moral, and spiritual preparation in leading satisfying and purposeful lives. In 1970, that mission expanded to include the admission of women. While the College has grown over the years, it has continued to focus much of its efforts on educating first generation college students.