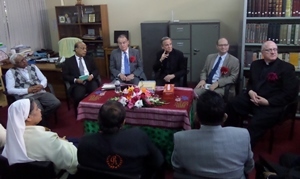 They met first with the members of the Board of Trustees of Notre Dame University Bangladesh and other individuals who have been involved in the planning and organization of the university. There was also an important presentation by Dr. A. K. Azad Chowdhury, Chairman of the University Grants Commission and a State Minister.

The meeting was followed by a larger reception and meal held in the auditorium of Notre Dame College, Dhaka. Fr. Benjamin Costa, C.S.C., Vice Chancellor of Notre Dame University, spoke about the new university’s vision, mission, and goals, including the aspiration to be a place where all the religious traditions of Bangladesh will have a place to meet, share, and find common ground. He added that special emphasis will be given to teaching and appreciating the cultural heritage and values. Similar themes were echoed by Fr. Jenkins and the Most Rev. Theotonius Gomes, C.S.C., Auxiliary Bishop of the Archdiocese of Dhaka, who were among the other speakers at the reception.

Read more about the University of Notre Dame in Dhaka, Bangladesh 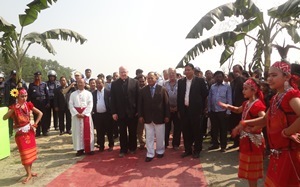 The following day, February 9, Fr. Lies, Dr. Entrikin, and Dr. Noble traveled to visit Notre Dame College, Mymensingh, which is still under construction and will become the Congregation’s second college in Bangladesh. It will be the first Catholic college in the Diocese of Mymensingh, which serves a predominantly tribal population, known as Garos. The Congregation established the Church’s first mission among the Garos in 1910.

A reception for the visitors was held on the college’s campus, beginning with a traditional Garo dance. Then Fr. Bakul S. Rozario, C.S.C., the Principal of Notre Dame College, Mymensingh, gave a speech, welcoming the visitors and all who were present. The subsequent speakers, which included, among others, the invited guests from the United States as well as the Honorable State Minister Promode Mankin, the Most Rev. Ponen Paul Kubi, C.S.C., the Bishop of Mymensingh, and Fr. James Cruze, C.S.C., Superior of the Congregation’s Sacred Heart Province (Dhaka, Bangladesh).

Read more about the progress on Notre Dame College, Mymensingh 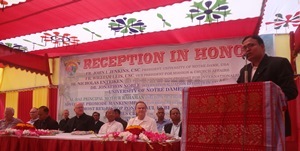 All the speakers sounded similar themes of the importance of education, and the great work that Holy Cross is doing in this field in Bangladesh. The visitors from the University of Notre Dame in the United States also spoke of the university’s whole-hearted commitment to support the college and explore a long-term relationship.

In memory of the visit, a memorial plaque on the new college’s campus was unveiled following the program.