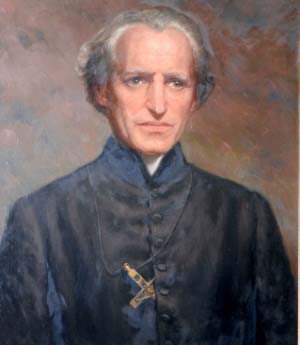 In a guide for teachers prepared in 1844, Blessed Basil Moreau wrote that students should not be made to live a type of life which they would have to abandon when they leave our institution. They should be trained in such a way that they may “everywhere be what they were at Sainte-Croix.” It was written specifically for Holy Cross’ first school in LeMans, France, but it could be applied to any of our educational ministries across the world.

Moreau’s school was much different than the typical militaristic institution of his day staffed by rigid taskmasters. He was a beloved father figure who understood that the true task of a Catholic education was to form hearts and save souls. Education without formation in religious and moral values becomes self-indulgent and, in its worst manifestations, domineering and cruel. One need only look at the various “isms” that have arisen in the last two centuries in the name of scientific or political progress to comprehend that, when the individual (or the state) becomes the supreme arbiter of what is right and good, a society loses its moral freedom.

Moreau was no pie-in-the-sky idealist. He grew up in a time of severe religious persecution yet wanted his students to be prepared to live in the world and do what they could to better it. He also once said, “Do not forget that Christianity is a practical religion. Admire its poetry for it is sublime, but study its Ten Commandments.” You will not find many people of any faith, Christian or not, critical of those because their underlying principles lie at the root of all the creeds:  love God, be honest and fair, practice justice.

Learn more about the life of Blessed Basile Moreau

As one studies Moreau’s spirituality, it becomes apparent that it is focused upon the most basic gospel demands: to be an apostle, to pick up one’s cross daily, and to conform one’s self wholly to the person of Jesus Christ. He shaped his students and his Congregation to do that, not apart from the world but to go forth out into it as Jesus did himself. That is what Moreau meant when he said that the task of Holy Cross was to educate them in such a way that they became citizens for both society and heaven. 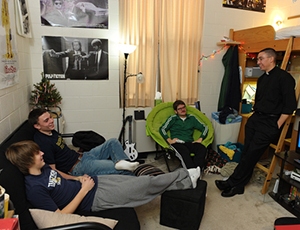 Moreau left behind an ideal of the Christian life and an educational charism that compelled Holy Cross not only to promote academic excellence in its institutions, but also to create environments within them that allowed for families of disciples to discover their true purpose and vocation together through instruction in classrooms and the relationships they built outside of them.

He understood that education and family are typically the two most formative influences upon young peoples’ lives. Those influences must complement and enrich one another for a person to grow into a faithful, well-formed adult and to be one everywhere he or she may go.

This relection was written for the Feast of Blessed Basile Moreau by Rev. James King, C.S.C., who is the Director of Campus Ministry and Religious Superior at the University of Notre Dame in Notre Dame, Indiana, in the United States.