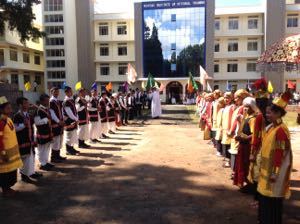 On October 30, the Province of North East India (Agartala, Tripura) dedicated the Moreau Institute of Integral Training (MIIT) in Shillong, India. The Most Rev. Dominic Jala, SDB, Archbishop of Shillong, led the blessing in the presence of a large crowd that included bishops, members of the Congregation of Holy Cross, other religious, and delegates from the government of Meghalaya, as well as other friends and well-wishers.

“The institute is born out of a dream of accompanying individuals to develop their whole-person,” added Fr. M.C. Abraham, C.S.C., the first Director of MIIT. He expressed his hope that the institute will enable individuals, including clergy, religious, and lay men and women, to develop their potentials for wholesome living, so that, in turn, they can be effective leaders for the animation of the communities in which they live and work.

The institute sits on property, known as “Brookdene,” that was purchased by the Congregation in 1929 as a permanent location for its mission in Shillong. The presence of Holy Cross in the wider region, however, dates back to 1853 when Blessed Basile Moreau and the Congregation took responsibility from Propaganda Fide for the Church’s mission in East Bengal.

See a timeline of the Congregation's history 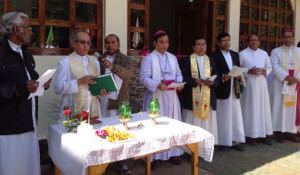 The Brookdene property was initially used as a place of rest and a transit house for the missionaries from the Dhaka and Chittagong dioceses who were ministering among the Christian communities in Assam, Meghalaya, Mizoram and Tripura. Later on, it became a home for boys from the interior villages of Northeast India who desired to pursue their studies beyond their primary school education. In the last two decades, Brookdene served as a formation house for candidates from the region who wished to embrace Holy Cross way of life and charism.

The new institute makes optimal use of the Brookdene property. Situated in the heart of Shillong, the capital city of the state of Meghalaya, the institute is perfectly located to fulfill its educational mission. The facility has the capacity to accommodate thirty-five persons with allied facilities for dining, recreation, and classes, as well as a chapel and library.

“The institute and the Congregation is committed to accompanying individuals and groups for a richer life, and to form them to be leaven in the North East,” said Fr. K.J. Abraham, C.S.C., the Superior of the Province of North East India.

Archbishop Jala agreed, saying in his address that he was happy to have the institute in his archdiocese. He expressed his hope and prayer that MIIT would help people to find a creative response to the socio-cultural and religious vacuum or restlessness created by the popular culture of modernism and consumerism.

As part of the festivities, Dr. Amperin Lyngdoh, the Honourable Minister for Urban Development for the Government of Meghalaya, inaugurated the website of the Institute: www.miitshillong.org. Dr. Lyngdoh expressed her desire for close collaboration between the Institute and the government.

The inaugural function was also marked by scintillating dances and music by the candidates and the students of the Holy Cross educational institutions in Meghalaya. They depicted the rich cultural ethos of the state of Meghalaya. The gathering concluded with a delicious lunch. 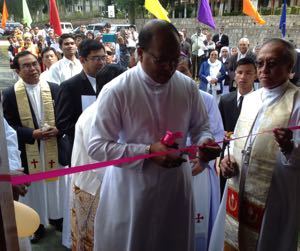 Fr. K.J. Abraham also used the occasion to express his gratitude to all who sacrificed so much to see the founding of this institute, which he described as one of the defining moments of the Congregation’s 150 year history in the region. He singled out Fr. Thalackan for his vision, planning, and perseverance from the project’s start to its completion. He also highlighted the hard work of Fr. K.O. Joseph, C.S.C., and Fr. Simon Fernandez, C.S.C., the staff at Brookdene, for their execution of the project.