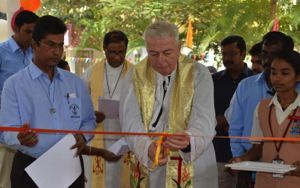 Many religious priests, brothers, and sisters, as well as parents and friends of the school, joined the students and staff in the celebration, which included a cultural gala in the school’s new assembly yard. 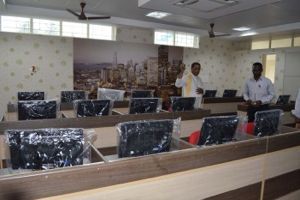 Br. Sesuraj, C.S.C., Superior of the Vicariate of Holy Cross Brothers in India, which administers the school, unveiled the plaque commemorate the inauguration.

Opened in 2008, Notre Dame of Holy Cross School has gained a reputation for providing a quality education. With that reputation, the school has quickly grown to over 1,800 students. The new building contains 53 classrooms, including labs for chemistry and language study. There is also a new administrative office.

“Our vision is to educate the heart and mind of the pupils and make them successful learners to face the world boldly with justice, equality, liberty and fraternity,” said Br. Arul Jeevan, C.S.C., the school’s principal.