During April and May of 2018, the Congregation of Holy Cross in South India inaugurated two new residences that provide for the community’s men in initial formation as well as its senior members in need of medical care. 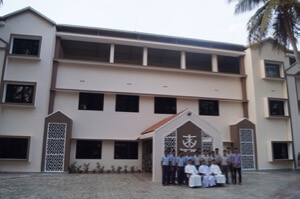 The first of the two residences to be inaugurated was the Holy Cross Students’ Home in Katapady in the state Karnataka on April 13. It is the residence for the candidates of the Province of South India who are in undergraduate studies. A dilapidated portion of the existing residence was torn down and a new wing was erected in its place.

The celebrations began with the blessing of the new building by the Most Rev. Gerald Lobo, Bishop of the Diocese of Udupi, who then presided at a Mass celebrating the new facility.

In his homily, the bishop praised the services of several Holy Cross priests who have worked in the diocese in various capacities, including as pastors of St. Vincent De Paul Parish in which the students’ home is located. 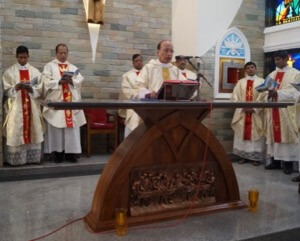 Fr. Leo D’Souza, C.S.C., Superior of the Province of South India, then inaugurated the building and dedicated it to the present and future candidates of Holy Cross. Expressing his gratitude to several agencies and benefactors who contributed by prayer and finances to this project, Fr. D’Souza expressed his confidence that the facility will go a long way in helping the province mold the future of Holy Cross and its ministries in India.

Fr. Terence Abranches, C.S.C., the superior of the residence, then thanked the invited dignitaries and the guests.

While still basking in the glow of the blessing of the new residence for candidates, the Province of South India gathered less than a month later on May 8 for the opening and inauguration of St. André Home in Sakalavara, Bangalore. St. Andre Home is a specialized facility dedicated to the care of senior Holy Cross confreres and those who need special assistance.

The Most Rev. Bernard Moras, Archbishop of the Archdiocese of Bangalore, blessed the new building and consecrated the chapel. In the ceremony that followed, the archbishop congratulated Holy Cross for the care of its senior missionaries and thanked the Congregation for the services rendered to the Archdiocese. 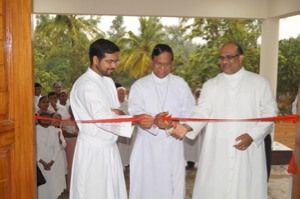 In the evening, Fr. D’Souza officially opened the building in the presence of the Holy Cross confreres who had gathered for the Annual Province Assembly. Several local religious also came to partake in the ceremony.

Fr. D’Souza also thanked the architect, contractor and others who were instrumental in the construction. He expressed the indebtedness of the Province to the benefactors and agencies who contributed financially to this project. He also singled out Fr. Lawrence D’Almeida, C.S.C., and Fr. Sydney Dias, C.S.C, who helped manage the construction project.