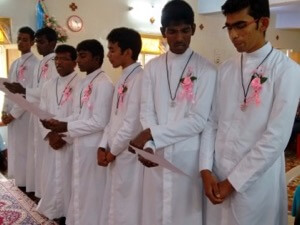 The Mass was held in the Chapel of the Salesian Sisters of Mary Immaculate Convent, which is located near the Novitiate. Fr. Justin Diraviam, C.S.C., Superior of the Vicariate of Tamil Nadu, presided at the Mass and received the vows of the four men from the Vicariate, while Fr. Leo D'Souza, C.S.C., the Superior of Province of South India, preached the homily and received the vows of the province’s three men. 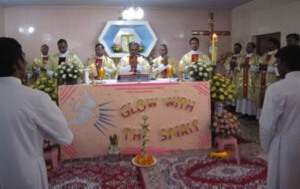 In addition to their confreres in Holy Cross and other local religious and clergy, many relatives of the newly professed participated in the celebration that ended with a festive lunch at the Novitiate.

Of the seven newly professed, six of them have gone to their respective sectors for a pastoral year, while the seventh has gone to Holy Cross Seminary in Pune for his philosophical studies. 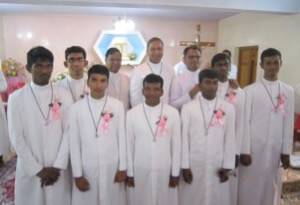 “With these newly professed, we have a big contingent of the temporarily professed religious who are either doing their regency or ecclesiastical studies and standing as a powerful sign of growth of Holy Cross in India,” said Fr. Justin. “This means we will soon have great assets of personnel available for the ministries and hope for the continuation of already existing ministries in each sector while the older ones can retire comfortably.” 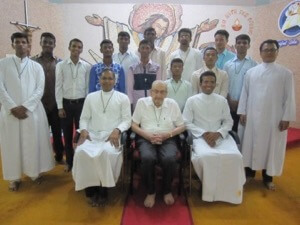 Initiation ceremony took place within the context of Mass. Fr. Sebastian presided at the Mass and received the men into the Novitiate. Br. Tessier was also present for the ceremony.

The eleven novices are now continuing their Novitiate year under the leadership of Fr. Abraham Susai, C.S.C., the Novice Master.

Special thanks to Fr. Justin Diraviam, C.S.C., for helping compile the news story.