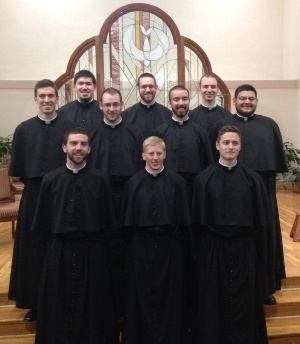 “Holy Cross is blessed by these young men who at this stage in their lives have made a most crucial and initial decision that they can best serve God and their brothers and sisters as members of the Congregation of Holy Cross,” said Fr. Thomas J. O’Hara, C.S.C., Superior of the United States Province. “This initial decision will be followed by additional years of discernment and preparation.  We are blessed not just by the numbers of men in these two novitiate classes but by the dedication to mission and prayerful attitude that is so obvious in the ways in which they conduct their lives.”

Read about more First Vows around the Congregation

Leading up to their First Profession, the novices were led in a retreat by Fr. Hugh Cleary, C.S.C., a former Superior General of the Congregation. Fr. Cleary currently works for Holy Cross Family Ministries as National Director in the United States. As a theme for the retreat, Fr. Cleary chose Pope Francis's Apostolic Letter to All Consecrated People on the Occassion of the Year of Consecrated Life. In the letter, Pope Francis invites consecrated people "to look to the past with gratitude," "to live the present with passion," and "to embrace the future with hope."

The families and friends of the novices, as well as Holy Cross religious, began arriving for the First Professions on Thursday. The weekend's fesitivites officially began Friday evening with a beautiful Mass celebrated in Holy Rosary Chapel, which is part of Sacred Heart Parish, in Cascade, Colorado. Fr. Donald Dilg, C.S.C., the Assistant Novice Master, preached, while Fr. Ken Molinaro, C.S.C., the Novice Master, presided. Among those at the Mass were the rest of the Novitiate community: Fr. Mike Couhig, C.S.C., a member of the Novitiate staff, and Br. James Blaszak, C.S.C., the Novitiate Procurator. A barbaque dinner followed at the Novitiate with the novices, their families and friends, and the Holy Cross community. 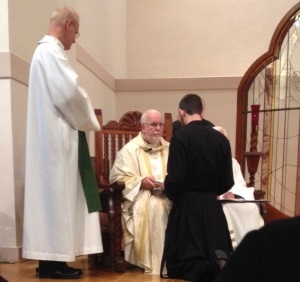 The Mass of First Profession was held Saturday morning. While Fr. O'Hara presided, Fr. Molinaro preached. In his homily, Fr. Molinaro called on the novices to "always remember God is the One who has taken the initiative in this relationship. 'It is not you who chose me, but I who have chosen you.' God's call is awlays unsolicited and comes first, leaving us free to respond.

"Understand that your life as consecrated religious is the work of the Holy Spirit," Fr. Molinaro continued. "Guided by the Spirit, you are to conform your life to Christ. Trust that the Holy Spirit will lead you ... and for heaven's sake, get out of the way! Never doubt that God has called you in Love, has chosen you."

Fr. Molinaro concluded by reminding the novices to "never forget, as our Constitutions remind us, that living [the vows] for the sake of the kingdom is clearly the work of a lifetime. ... May you open yourselves ever more profoundly to God's transforming Love. Fall in love with God, stay in love, and it will make all the difference!"

Following the homily, the ten novices came and knelt before Fr. O'Hara to profess the vows of poverty, chastity, and obedience according to the Constitutionsof the Congregation of Holy Cross. After all ten had professed, they received their religious habits as well as the cross and anchors as the sign of their profession in the Congregation. 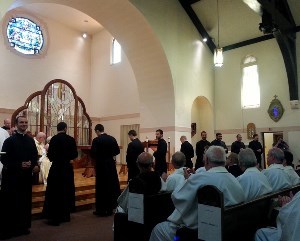 "Without realizing it, I sought to live the evangelical counsels of poverty, chastity, and obedience for most of my life," said newly professed Mr. Rathke. "Indeed, I believe that God calls all Christians to conform their lives to the poor, chaste, and obedient Christ. What makes my profession of vows significant is that I am making a radical, single-hearted commitment to focus my entire life on conforming to Christ in the context of the Holy Cross community--a community I now call my family.

"Through this brotherhood--through our common life together, our ministries, our prayer, and our particular commitment to chastity, poverty, and obedience--I hope to enter ever deeper into the sacrificial love that draws me into more intimate union with Christ and the entire Church body." 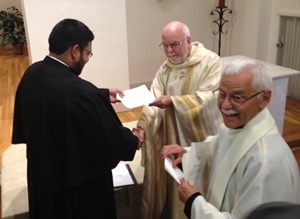 A reception followed in the Sacred Heart Parish Center. Before heading to the reception, however, the newly professed received their first letters of obedience from Fr. O'Hara, assigning them to Moreau Seminary. Obedience letters in hand, the newly professed were greeted and congratulated by many, including members of the parishes where they had served this year on Sundays, as well as colleagues from their Wednesday ministry placements at local hospitals and Catholic Charities.

On Monday, August 3, the newly professed loaded up in the Novitiate vans and began the two-day trip back to Moreau Seminary in Notre Dame, Indiana. The vans will then be passed to the incoming class of novices, which numbers seven. All of them are members of the United States Province. They will arrive to the Novitiate on August 11 and be received formally into the Novitiate later in the week.

Special thanks to Sue Gerlach, a member of the Sacred Heart Parish Staff, for some of photos for this news story.