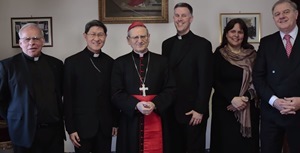 Just over a month ago, on April 21, 2015, the cause for sainthood for Servant of God, Fr. Patrick Peyton, C.S.C., took an important step forward as the Positio (Position Document) on his life and holiness was presented to the Congregation for the Causes of the Saints in Rome, Italy. The Positio was received by the Prefect of the Congregation, Cardinal Angelo Amato.

The presentation was made by Fr. Willy Raymond, C.S.C., President of Holy Cross Family Ministries; Fr. David S. Marcham, Vice Postulator of the Cause; and Dr. Andrea Ambrosi, Postulator of the Cause. They were joined by Cardinal Luis Antonio Tagle, Archbishop of Manila, Philippines, who is a key and enthusiastic support of Fr. Peyton’s cause.

The Positio is the result of a four-year study of Fr. Peyton's life and ministry. It is the synthesis of the 6,000 page report completed by the tribunals in the Archdiocese of Baltimore and 34 other dioceses around the world.

“We are very pleased to see progress in Fr. Peyton’s Cause,” said Fr. Raymond. “Many people regularly tell me we need a ‘Saint for Families’ and that Father Peyton is the appropriate candidate.”

If the Congregation for the Causes of Saints determines that Fr. Peyton lived a life of heroic virtue and holiness, his cause will be advanced to the Holy Father who can then confer the title of “Venerable” upon him. The declaration of “Venerable” is the last step before beatification, which includes a miracle attributed to the person’s intercession. 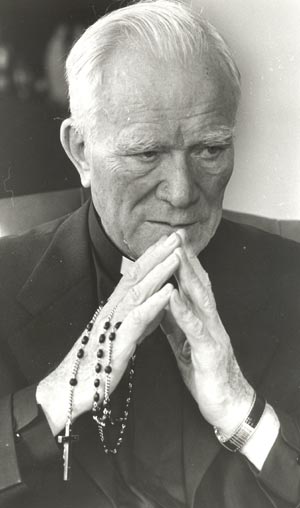 Known to many as the “Rosary Priest” for his tireless, global promotion of the rosary and family prayer, Fr. Peyton first proclaimed the phrases "The family that prays together stays together" and "A world at prayer is a world at peace.” At the time of his death, Peyton had preached to more people in person – an estimated 28 million – than any other Catholic. He was also a leading pioneer in using the media to spread faith and the gospel.

“We honor Father Peyton’s memory by bringing families together to pray, especially the rosary.  We continue to fulfill his vision by sharing his strong belief with families around the world that the family that prays together stays together,” said Fr. Raymond.

So far, the Congregation of Holy Cross has two members who have been raised by the Universal Church to veneration at the altar: Blessed Basile Moreau, the founder of the Congregation, and St. André Bessette, a humble Canadian brother who was known as the “Miracle Man of Montreal.”

Special thanks to Holy Cross Family Ministries for contributing to this news story.