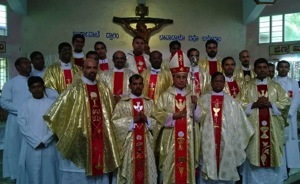 On November 28, Deacon Oliver Christ Nazareth, C.S.C., was ordained a priest at Holy Cross Church, Byndoor, in Karnataka, India. A member of the South India Province, Nazareth was the seventh priest ordianed in India for the Congregation of Holy Cross over the past three months, including one for the Vicariate of Tamil Nadu and five for the Province of North East India.

The Most Rev. Gerald I Lobo, Bishop of Udupi, presided at the Mass and ordained Nazareth in the presence of his family, relatives, Holy Cross confreres and hundreds of members of the parish. Leading the Holy Cross contingent at the Ordination was Rev. Leo D'Souza, C.S.C., the Superior of the Province of South India.

Nazareth is the son of Mr. Raymond Nazareth and Mrs. Eugene Nazareth. Born in 1982, he joined the Congregation as a candidate after completing Class X. He made his First Profession in the Province of South India in 2007. He made his Profession of Final Vows and was ordained a deacon in February 2013. He completed his theological studies at Jnanadeepa Vidyapeeth, Pune, prior to his Ordination to the Priesthood.

Nazareth chose "Lord in Thy Loving Service" as the theme of his Ordination, and he is already engaged in priestly ministry at the apostolates of the South India Province.

Explore a photo gallery of Ordinations around the world