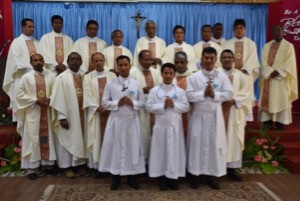 Back on September 14, 2018, the Feast of the Exaltation of the Holy Cross, the Congregation of Holy Cross’s Province of North East gathered to celebrate the Final Professions of three of its seminarians.

The three men who professed their Final Vows of Poverty, Chastity, and Obedience according to the Constitutions of the Congregation of Holy Cross are: Mr. Prasanta Basumatary, C.S.C., Mr. Jowelson Khongtani, C.S.C., and Mr. Marbilus Kharakor, C.S.C. They had recently completed their theological studies and initial formation at the Congregation's House of Formation in Pune.

Explore a Vocation to Holy Cross

Their professions were received by Fr. Simon Fernandes, C.S.C., the newly elected Superior of the Province of North East India. Fr. Simon also presided and preached at the Mass, which was held at the Moreau Institute of Integral Training in Brookdene, Shillong.

In addition the three men’s family members and confreres in Holy Cross, other religious men and women and friends joined in the Eucharist and the celebration and program that followed in the facilities of the MIIT.

The following day, the Feast of Our Lady of Sorrows, the Most Rev. Dominic Jala, S.D.B., Archbishop of of the Archdiocese of Shillong, ordained the newly professed to the Order of Diaconate at Holy Cross Parish in Mawkynrew.

In addition to many Holy Cross religious, a large group of parishioners attended the ceremony, which was followed by a celebration of both the newly ordained and Congregational patroness.

Explore the work of Holy Cross in India