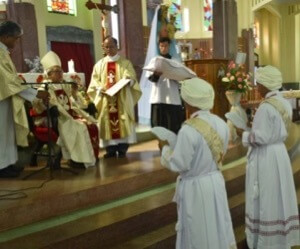 On May 18, 2019, the Congregation of Holy Cross gathered in Shillong, the capital of the Indian state of Meghalaya, to celebrate the Priestly Ordinations of two native sons: Deacons Jowelson Khongtani, C.S.C., and Marbilus Kharakor, C.S.C. Both of the new priests hail from Meghalaya and are members of the Congregation’s Province of North East India.

Presiding at the Ordination Mass was the Most Rev. Dominic Jala, Archbishop of the Archdiocese of Shillong. The celebration was held in the Archdiocese’s Mary Help of Christians Cathedral, and well over 2,000 people attended the liturgy to share in the graces and give thanks to God.

There were also over 50 concelebrating priests, including many from other religious congregations, as well as many other religious women and men who came to celebrate two of the region’s own being ordained.

The following day, Sunday, May 19, the newly ordained Fathers Jowelson and Marbilus celebrated Masses of Thanksgiving in their home villages in their native languages. Both Masses were moments of great joy and great pride for their respective hometowns. The celebrating continued long after the Final Blessings of the newly ordained. 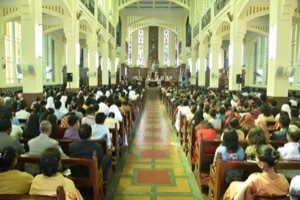 Fathers Jowelson and Marbilus are the second and third Priestly Ordinations for the Province of North East India in 2019. Their Final Vows and Deaconate Ordination classmate, Fr. Prasanta Basumatary, C.S.C., was ordained to the priesthood on March 3, 2019, by the Most Rev Michael Akasius Toppo, Bishop of the Diocese of Tezpur.

Each of the newly ordained is beginning his priestly ministry in a different state, revealing the missionary character of the Province of North East India. Fr. Prasanta is at a mission in Mizoram; Fr. Marbilus is in Arunachal Pradesh, near the border with China; and Fr. Jowelson is assigned to a mission in his home state of Meghalaya.

In these assignments, the hope is that these three young priests, through God's grace, will strive to lift souls, to teach and testify, to bless and counsel, and thus to advance the work of salvation. 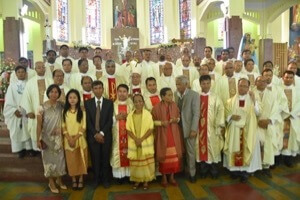 Fathers Prasanta, Marbilus, and Jowelson are part of a larger Ordination class of 11 for Holy Cross in India, which includes five for the Province of South India and three for the Vicariate of Tamil Nadu.

Special thanks to Fr. Kanikkai Jeyraj, C.S.C., for his assistance in preparing this article and sending pictures.