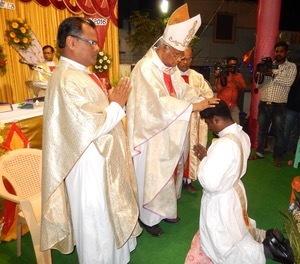 On Saturday, January 30, 2016, Fr. Cruz Jockin, C.S.C., was ordained in his home parish in Trichy. Fr. Jockin was the forth priest ordained for the Congregation of Holy Cross in India over the past several months. Holy Cross in India typically celebrates its priestly ordination each year during the months of October through January. 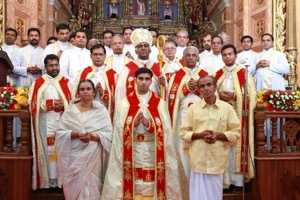 The first of the four to be ordained was Fr. Mahesh Joseph. Surrounded by family, friends, and members of the Congregation, Fr. Mahesh was ordained in his home parish of St. Mary’s Forane Church, Muttom, Cherthala, in Kerala, on October 28, 2015. The Most Rev. Mar Sebastian Adayanthrath, Auxiliary Bishop of Archdiocese of Ernakulam-Angamaly, was the presiding and ordaining bishop. Later that same day, Fr. Mahesh celebrated his first Mass.

For his first ministerial assignment, Fr. Mahesh is now the Vocation Facilitator for Kerala as well as the Assistant Director of Formation the at the Holy Cross Students’ Home at Aymanam, Kerala. 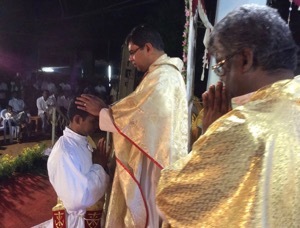 Just two days later, on October 30, 2015, Fr. Francis Xavier was ordained by the Most Rev. Antony Devotta, Bishop of the Diocese of Thiruchirappalli. The Ordination Mass was held at at St. Francis Xavier’s Church, Malampatty. The following day, October 31, with many of the same family, friends, and Holy Cross religious present, Fr. Francis celebrated his first Mass in the same church.

Originally from the state of Tamil Nadu, Fr. Francis following his Ordination continues to serve as a missionary in the Province of North East India. He is working as an assistant at St. John’s Parish, Khawzawl, in Mizoram.

Read news of other ordinations in Holy Cross 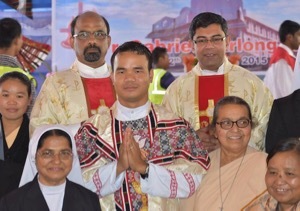 Fr. Gabriel Darlong’s Ordination almost two months later on December 12, 2015, in a Mass at Good Shepherd Parish Church, Kathalcherra. He was ordained by the Most Rev. Lumen Monteiro, C.S.C., Bishop of the Diocese of Agartala.

A large crowd of family, friends, priests, and religious were on-hand for the historic ordination, as Fr. Gabriel is the first Holy Cross priest ordained from the Darlong community of Tripura. His ordination represents a beautiful fruit of the work of the Holy Cross missionaries who have been serving in his village for 27 years. Fr. Gabriel has been assigned to work at the newly erected St. Andre Parish in Nyapin, Arunachal Pradesh.

Rounding out this season’s Ordination class in India, is Fr. Cruz Jockin, who was ordained by the Most Rev. Anthony Devotta, Bishop of Diocese of Tiruchirapalli, on January 30, 2016. In addition to many members of Holy Cross, family members, relatives, and friends surrounded Fr. Cruz his Ordination and partook in the festive dinner that followed. 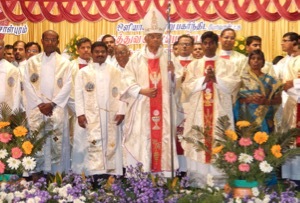 Like Fr. Gabriel’s Ordination, Fr. Cruz’s Ordination was historic. He is the first priest from the city of Trichy to be ordained for Vicariate of Tamil Nadu. Holy Cross has served in the historic city for almost 50 years.

Accordinging to Fr. Justin Diraviam, C.S.C., Superior of the Vicariate of Tamil Nadu, these four ordinations testify to the "visibility and stability of our missions" in India.