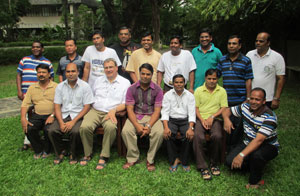 Fifteen Holy Cross brothers from India and Bangladesh descended upon the Philippines on May 13 for a three-week renewal program entitled “To be Refashioned by God’s Creating Grace.” The program, which was planned and organized by the General Administration, is being held at the East Asian Pastoral Institute at Ateneo de Manila University in Manila.

“The purpose of this program, which has been the works for two and a half years, was to support and encourage the brother’s vocation, especially in Asia, where there is great potential for growth,” said Br. Thomas Dziekan, C.S.C., Vicar General of the Congregation.

Read the Constitutions of the Congregation of Holy Cross 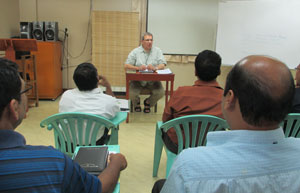 “We wanted to give the brothers an opportunity to gather together to discuss their common vocation, religious vows, and mission, especially in the context of their countries in which Christians are in the minority and where their vocation is not well known and appreciated,” said Br. Dziekan.

“We wanted to give them the opportunity that I had as a young brother: the chance to have mentors and role models. This way they can become leaders and role models for the next generation of Holy Cross brothers.”

“Father Arthur Leger, SJ, who is the Director of EAPI was eager to work with us in developing this program because it helps address a growing need among men’s communities in Asia. They were excited for the opportunity to try to put flesh on such a program,” said Br. Dziekan. 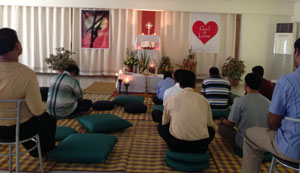 The program began with the brothers making a three-day Ignatian-style retreat that set the tone for the following weeks of the program. During the retreat, each brother worked individually with a spiritual director with whom they can continue to meet for the duration of the renewal program in Manila.

Following the retreat, Br. Dziekan gave a couple of talks on the charism, spirituality, and mission of Holy Cross. From there, the program has moved to focus on religious vows and community life. While drawing from the Holy Cross Constitutions, the sessions are being led by the Jesuit staff of the EAPI. The third and final week will focus on the tools needed to be apostolic religious and leaders.

“This is a new program so no one knew quite what to expect, but it is off to a great start,” reported Br. Dziekan. “The fifteen brothers had a lot of enthusiasm, as ongoing formation is a felt need among them. I am hopeful that the program will help them live and serve their vocations as brothers with greater zeal.”

After this pilot year, the General Administration plans to run the program again in 2014 and 2015, allowing 45 brothers to participate.