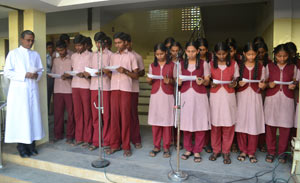 In late July, Holy Cross Matriculation School, Somarasampet, Trichy, in Tamil Nadu, India, received word that it had been approved to become a Higher Secondary School. With this new status, the school can expand beyond 10th grade to include 11th and 12th grades as well, which constitute all the levels of education in India prior to attending college.

“[Receiving this approval] has been a herculean task for the past three years,” said Rev. David Adaikalam, C.S.C., Principal of Holy Cross Matriculation School. “At last, we have been blessed with this privilege that our students need not to look for another school to complete their schooling.”

The Congregation of Holy Cross established the English-medium school in Somarasampet, Trichy, to serve the children of peasant families in 2002. From its humble beginnings in the midst of several poor villages, the school slowly expanded in its first six years to reach 463 students in 2008. In that year, Fr. Adaikalam arrived as principal, and since then, the school has more than tripled in size, with 45 teaching staff now serving over 1,500 students. 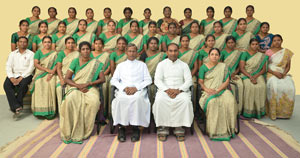 Despite the growth in the school’s enrollment, the Congregation wanted the school to be a full-fledged school, offering all levels of education through 12th grade. The formal process for approval as a higher secondary school was launched in October 2011 by Rev. Dominic George, C.S.C., who was the Secretary and Administrator of the school at the time. His work was continued by Rev. Telespore, C.S.C., and Rev. John Peter, C.S.C.

The Congregation and the school received the news of the successful end to its application “with immense joy and gratitude to God.”

Already, the first class of 12th graders at the school is preparing for its government examinations in March 2014.

“We are happy and committed to continue the legacy of providing a Holy Cross education to our students, educating their hearts and minds,” said Fr. Adaikalam.

Explore a Photo Gallery of Holy Cross education around the world