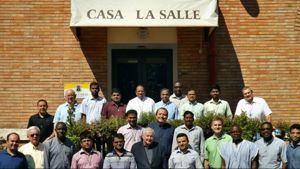 The Second Holy Cross Forum met for its third and final session June 17-20 at the Generalate of the Congregation of Holy Cross in Rome. The Forum, which was a new program introduced by this General Council, brings together young Holy Cross brothers and priests from around the world to gather with one another and to meet with the Congregation's leaders.

Sixteen of the Congregation's young brothers and priests participated in this Second Holy Cross Forum, which previously met in Rome June 5-8, 2013, and January 17-20, 2014. 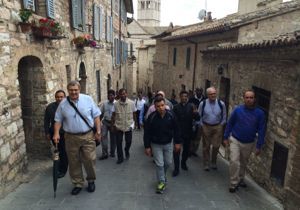 After arriving to Rome and the Generalate on June 17, they spent their first full day in Italy making a pilgrimage to Assisi. The members of the General Council accompanied them as they visited the various churches and holy sites in the city, sanctified through the lives of St. Francis and St. Clare. As part of the visit, they celebrated Mass in the Basilica of San Francesco d'Assisi, where the famous saint is buried, and then renewed their religious vows in the Basilica of Santa Maria degli Angeli, which houses the little church where St. Francis prayed and died.

The next two days were spent in sessions in the Generalate in Rome. The main focus of these sessions was the Congregational planning process that was launched by the 2010 General Chapter in an effort to renew the Congregation's structures and religious life in service of its international mission. The Forum participants were updated on the results of a recent Congregation-wide survey and then given a chance to add their own thoughts and opinions. 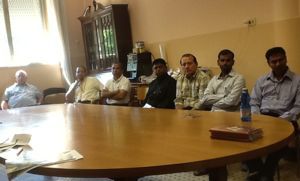 There were also opportunities for the Forum participants to catch up with each other on their lives and ministry and to continue to deepen the relatioships that have been growing over the previous gatherings.

"The Forum was an incredible experience," said Fr. Nate Wills, C.S.C., a member of the United States Province. "I got the chance to meet priests and brothers from around the world and share the hopes, challenges, and joys of our ministry in Holy Cross. I think all of us had a real sense of pride in the ways that our Holy Cross mission is being carried out throughout the world.

"I’ve always known Holy Cross was an international community, but I’ve never been to Brazil, Haiti, East or West Africa, Bangladesh, or India," continued Fr. Wills. "During the time we spent praying, talking, and eating together, I was able to make personal connections to far away places through these faith-filled religious. Now I can say that I don’t simply know someone in these places throughout the world, they are truly my friends and brothers."

This formation of relationships among the young brothers and priests in the Congregation was one of the primary goals that the General Council envisioned in creating the Forum. They believed that such personal relationships are essential to fostering the Congregational perspective that the General Chapter called for and that will guide Holy Cross into its perferred future in service of the Church and the world. According to Fr. Wills, this goal was certainly met. 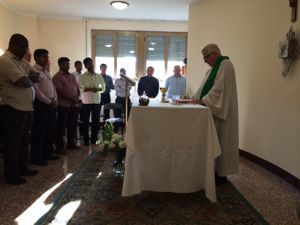 "During our conversations as we shared the good work of Holy Cross in each of our provinces, districts, and vicariates, the language changed from 'my ministry' to 'our ministry.' I think it’s that spirit of collaboration that will be essential in the future of our Congregation," said Fr. Wills.

Br. Thomas A. Dziekan, C.S.C., the Vicar General and First General Assistant, concurred, "It was a wonderful experience for all, espcially the Members of the General Administration who witnessed the joy of our young confreres in seeing one another and in being together.

"The pilgrimage to Assisi was a great beginning to put all in a contemplative move, cotinued Br. Dziekan. "All were interested in the survey results and were encouraged to question and share their perspectives and their hopes and dreams. Lastly, there was a honest sharing among all and everyone felt encouraged and affirmed in his own vocation to Holy Cross."

The Third Holy Cross Forum, which will be the last to meet before the 2016 General Chapter, is set to convene in January 2015. It will bring together a new crop of young brothers and priests from around the Congregation just as the previous two forums have done.