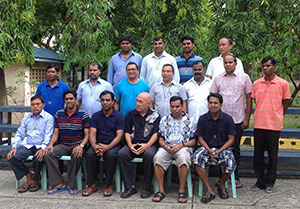 Today, May 30, Fifteen Holy Cross brothers from India and Bangladesh are wrapping up a three-week renewal program in the Philippines. The program, which was planned and organized by the Congregation’s General Administration, began back on Monday, May 12.

This marks the second time that the East Asian Pastoral Institute at Ateneo de Manila University in Manila has hosted this renewal program for the Congregation. The first time was May of last year when 10 brothers from India and 5 from Bangladesh participated. Another session is planned for 2015, allowing 45 total brothers to participate.

According to Br. Thomas Dziekan, C.S.C., Vicar General of the Congregation, who has overseen the development and implementation of the program, its purpose is “to support and encourage the brother’s vocation, especially in Asia, where there is great potential for growth.”

“We wanted to give the brothers an opportunity to gather together to discuss their common vocation, religious vows, and mission, especially in the context of their countries in which Christians are in the minority and where their vocation is not well known and appreciated,” said Br. Dziekan. “This way they can become leaders and role models for the next generation of Holy Cross brothers.”

While last year’s program was very well-received by its participants, the East Asian Pastoral Institute and Br. Dziekan were able to draw from last year’s experience to strengthen the program. These improvements included weaving the theme, “To be Refashioned by God’s Creating Grace”, throughout the program.

In addition, the first two days were spent exploring the context, both cultural and ecclesial, in which the Church in Asia, and thus the brothers in the program, find themselves.

The centerpiece of this year’s program, like last year’s, was a three-day Ignatian retreat. The brothers were encouraged each day to take five hour-long prayer periods with Scripture, using the Ignatian visualization technique to enter more deeply into the Word of God. They also met with a spiritual director each day to guide them through the retreat.

Blessed Basile Moreau, the founder of the Congregation of Holy Cross, was a big advocate of the Spiritual Exercises of St. Ignatius, having studied them and prayed them himself. He even composed original versions of the spiritual exercises for Holy Cross brothers, sisters, and priests respectively.

“Many of the brothers had never experienced a retreat like this before with Ignatian prayer,” said Br. Dziekan. “They found it to be a very moving experience. It opened their eyes to a different way of seeing God and relating to God.”

Following the three-day retreat, the program moved to focus on religious vows and community life, with the sessions drawing from the Holy Cross Constitutions. This third and final week focused on the tools needed to be apostolic religious and leaders. 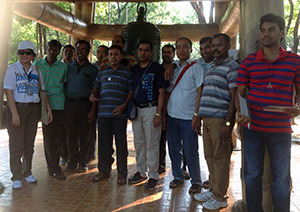 An added benefit for this year’s program was that other groups of Church ministers – lay, religious, and ordained – from other Asian countries were participating in other programs at the East Asian Pastoral Institute at the same time. This allowed the brothers to interact with others serving in the Church and share their experiences with one another. It was a great learning experience.

This year, the participants in the program ranged in age from their young 30s to their young 50s, although most of them are on the younger end of that spectrum.

“Perhaps due to their younger age and their experiences in formation, they really jumped right into the program,” said Br. Dziekan. “I had the opportunity to speak with each one of them individually, and everyone expressed how grateful they were for this experience provided to them by the General Administration. It was fulfilling a need greater than just the usual retreat or renewal program. Even after just the first week, they could speak to how it was changing them and opening their eyes.”