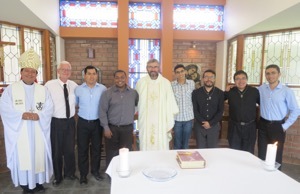 On January 7, the Feast of St. André Bessette, the Congregation of Holy Cross officially received six new novices into its Novitiate in Huaycán, Perú. The largest group of new novices comes from Brazil, with three men in the Novitiate. Chile, Mexico, and Peru each have one novice in Huaycán this year.

The new novices were received in a Mass celebrated in the Novitiate’s Chapel. Fr. John Phalen, C.S.C., who is beginning his term as Novice Master, presided at the Mass and received the men into the Congregation. He was assisted by Br. John Tryon, C.S.C., the Assistant Novice Master.

The Most Rev. Jorge Izaguirre, C.S.C., Bishop Prelate of the Territorial Prelature of Chuquibamba, Peru, was also on hand for the celebration, as were members of the Holy Cross community in the District of Peru. There were also several representatives present from the various countries from which the novices hail. 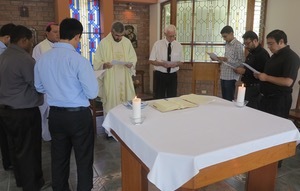 In his homily, Fr. Phalen spoke about St. André Bessette and how he lived as a true child of God, depending trustingly on God in his life. He reminded the men entering the Novitiate that Jesus spoke not only of the need to have the faith of a child, but also the "need to be reborn." Calling their Novitiate year a "priviliege," Fr. Phalen invited the new novices to see it as their "opportunity to be reborn by your mother, the Church." 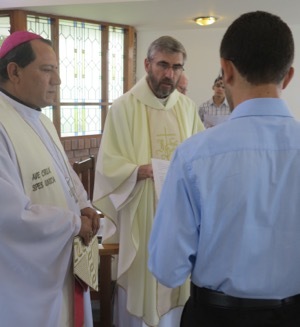 The Constitutions state, “The novitiate is the beginning of life in the congregation. Novices are helped to form themselves in meditation and prayer, in the mutual services of a common life, in apostolic service, and in knowledge of the history and spirituality, character and mission of Holy Cross. In short they are challenged and helped to open their hearts to the gospel, to live under the same roof with one another, and to create a brotherhood of disciples. The novitiate is their apprenticeship in celibacy, poverty and obedience” (6:62).

Following the Mass, there was a festive lunch at the Novitiate.

The new novices are now in retreat to help them enter into this unique year in their formation as religious of the Congregation, which concludes with their profession of First Vows in Holy Cross.

Reflecting on the reception of the six new novices, Bishop Izaguirre said, "This is another sign that Holy Cross has planted its roots deeply and is now flourishing in Latin America." 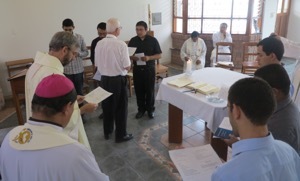 “The District of the Religious of Holy Cross in Brazil rejoices greatly with the entrance of its three postulants into the Holy Cross Novitiate in Huaycán, Perú,” added Fr. José de souza Paim, C.S.C., Director of Formation for the District of Brazil. “We pray that Jesus, the Good Shepherd, guides, feeds and strengthens them, as well as their companions from Mexico, Chile, and Peru, to continue responding with generosity and joy to his call.”