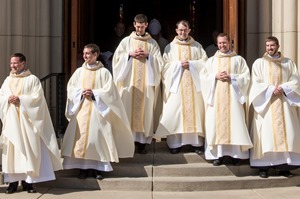 Saturday, April 11, was a joyful day for the Congregation of Holy Cross as six members of the United States Province were ordained to the priesthood. The Most Rev. Daniel Jenky, C.S.C., the Bishop of Peoria, presided at the Ordination Mass, which was held at the Basilica of the Sacred Heart on the campus of the University of Notre Dame in Notre Dame, Indiana.

The prayer and festivities of the Ordination Weekend began Friday night, April 10, in the Moreau Seminary Chapel where those to be ordained, their families and friends, and the wider Holy Cross community gathered for a prayer service. Fr. Thomas J. O’Hara, C.S.C., the Superior of the United States Province, presided and preached. 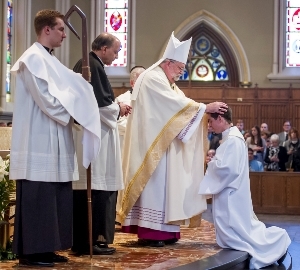 In his homily, Fr. O’Hara drew from St. Paul’s Letter to Timothy. He urged the six men to never lose their sense of awe and to be humble, yet strong in their service as priests.

View Ordinations from Around the World

“You are like Timothy – young men who are about to receive their enormous responsibility,” said Fr. O’Hara. “The truth is much of the world in Timothy’s time did not accept the gospel.  So too for us in our time. Many in the cultures in which you may live, whether in this country or anywhere else, may even despise what you stand for, but it is your privilege and responsibility to preach the gospel with conviction drawing from the power of God, even if it means standing apart from any given culture at any given time. For as our Constitutions of Holy Cross state, ‘The mission is not simple. That for the kingdom to come in this world, disciples must have the competence to see and the courage to act.’

“My brothers you have been trained in good Holy Cross fashion to have the competence to see and the courage to act. Remind yourselves of that tonight. Like Timothy, God will empower you to have the strength to carry on – to accept all your challenges. Why? Because God loved you from the moment he created you. God has been with you through all the ups and downs of your formation, is lovingly with you tonight, will be with you as hands are imposed tomorrow and all the days that lie ahead in your lives.”

The Ordination Mass followed the next afternoon. The Basilica of the Sacred Heart filled with a large contingent of Holy Cross priests, brothers, and sisters, as well family and friends of the men to be ordained. There also were many students and parishioners from the schools and parishes where the men had served as deacons this past year.

In his exhortation to six men, Bishop Jenky took the words of Blessed Basile Moreau, the founder of the Congregation, to encourage them: “Keep always before your eyes the example of the Good Shepherd. Imitate His example, be adorned with His virtues, be other Christs, and let His life be revealed in yours.’ So in your priesthood, in your religious life, in your personal journey of faith, live every day the guiding motto of the Congregation of Holy Cross: Ave Crux, Spes Unica; Hail the Cross, Our Only Hope!”

Following the Ordination Mass, a reception with the six new priests was held for the public in the Main Building of the university. Later that evening, a dinner was held back at Moreau Seminary for the new priests, their friends and families, and the Holy Cross community.

Then on Sunday, the six new priests all celebrated Masses of Thanksgiving, both on the university campus and in various Holy Cross parishes in the area. In the coming weeks, they will return to their hometowns to celebrate Masses there as well.