On Saturday, January 14, Arbok Lyngdoh Lyngkhoi, C.S.C., was ordained a priest in a Mass at the Cathedral of Mary Help of Christians in Shillong, India. Fr. Abrok’s ordination was the sixth and final priestly ordination in India for the Congregation of Holy Cross in the 2016-2017 Ordination Class. 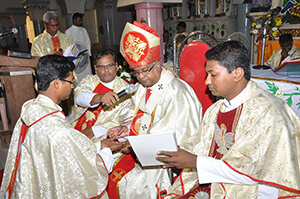 “The recent ordinations in India bring joy to all the sectors as they are the fruits of the decade long joint formation of Holy Cross in India,” said Fr. Justin Diraviam, C.S.C., Superior of the Vicariate of Tamil Nadu. “It is also a motivation satisfying experience for all those who are involved in initial formation and especially in the vocation promotion ministry.”

View a Gallery of Ordinations from Around the World 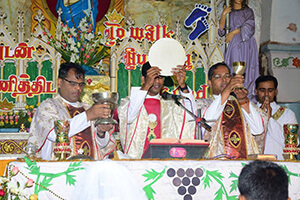 The first of the class to be ordained was Fr. Ranjith of the Vicariate of Tamil Nadu. His ordination took place November 19, 2016, at Our Lady of Snows Church in Royappanpatty, Tamil Nadu. The Most Rev. Antony Pappusamy, Archbishop of Madurai, was the ordaining bishop.

As Our Lady of the Snows Church is Fr. Ranjith’s home parish, he was joined in his Ordination and the celebrations that followed by many of his family and friends, as well as confreres in Holy Cross. Many of those same people returned the following day, November 20, for Fr. Ranjith’s First Mass, which was held in the same church.

After serving in a variety of dioceses as a deacon, Fr. Ranjith will begin his priestly ministry to God’s People at the Congregation’s parish in Ariyanallore in the Diocese of Dindigul. According to Fr. Ranjith, his “hopes and dreams are the same as those of the Congregation–that is to be involved in education, pastoral and family ministries.” 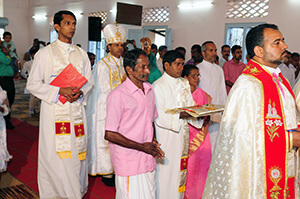 The next to be ordained was Fr. Shinto on November 24, 2016. A member of the Province of South India, Fr. Shinto was ordained by the Most Rev. Jose Pulickal, Auxiliary Bishop of Kanjirappally, at St. George's Church in Marykulam, Kerala. The church is Fr. Shinto’s home parish.

Per the tradition of the Syro-Malabar Rite, of which he is a member, Fr. Shinto celebrated his First Mass immediately following his Ordination. Following the Mass, there was a fellowship meal for all who had gathered to celebrate and give thanks.

After having served during his deaconate in the Archdiocese of Bangalore at St. Mary's Basilica and Infant Jesus Shrine, Fr. Shinto will spend is first year as a priest working as the Vice Principal of Holy Cross High School at Station Ghanpur, Telengana. He will also serve as the Administrator of the Formation House there. 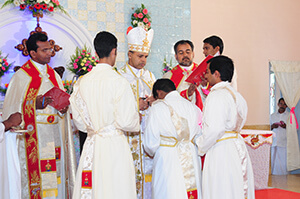 “My dream as a Holy Cross priest is to serve all people and make God and Holy Cross known to people, especially around where we are working,” said Fr. Shinto, reflecting after his Ordination to the priesthood. “Another and important dream of my priestly life is to live a happy and joyful life in our community wherever I am placed and make my presence felt in the community by supporting and caring for each members of my community.” 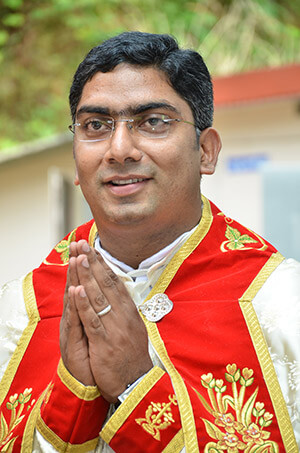 Fr. Ajith, a member of the Province of North East India, was the third member of the class to be ordained. He was ordained by the Most Rev. George Madathikandathil, Bishop of Kothamangalam, at St. George's Church in Kallanickal, Kerala, on November 26. St. George’s is Fr. Ajith’s home parish.

Following the Ordination, there was an apage meal to share fellowship and give thanks for Fr. Ajith’s Ordination and his future service to God’s People.

Like Fr. Shinto, Fr. Ajith is of the Syro-Malabar Rite, and so he celebrated his First Mass the same day of his Ordination.

Fr. Ajith is from the southern India state of Kerala, yet he works as a missionary in the Congregation's Province of North East. As a deacon, he spent time serving both at Holy Cross Parish in Koloriang, Arunachal Pradesh and at his home parish of St. George’s. Now, as a priest, he has been assigned to work at St. André Parish in Nyapin, Arunachal Pradesh.

“I want to attend the pastoral needs of the people. I work in a remote area, and I would like to work for spiritual, physical, and social welfare of the people whom I serve. I want help them to grow in their faith,” said Fr. Ajith. 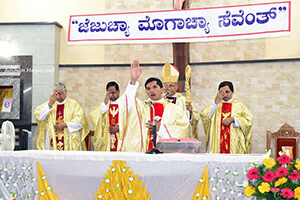 Fr. Rajesh’s Ordiantion took place at Mother of God Church in Mogarnad, Karnataka, which is his home parish. He was ordained by the Most Rev. Aloysius Paul D'Souza, Bishop of Mangalore. A celebration continued on the grounds of the church after the Ordination, with around 750 people in attendance, including Fr. Rajesh’s family as well as many priests and religious. The program included music and several addresses of congratulations and gratitude.

Fr. Rajesh celebrated his First Mass the following day, December 14, in his home parish. In addition to members of his family, he was joined by many of his confreres in Holy Cross.

Having worked in parish ministry as a deacon, Fr. Rajesh now will serve at the Holy Cross Family Ministry Center in Viveknagar, Bangalore. There he will be assisting Fr. Arul Raj, C.S.C., and Fr. Herve Morissette, C.S.C. in serving families in their needs.

“I want to be a priest full of spirituality and humanity,” said Fr. Rajesh. “I want to find God in everything and everything in God. I want to give Christ to all through my words and deeds. As a religious priest of Holy Cross, I want to make known Holy Cross to others and its ministries, especially educating heart and mind.” 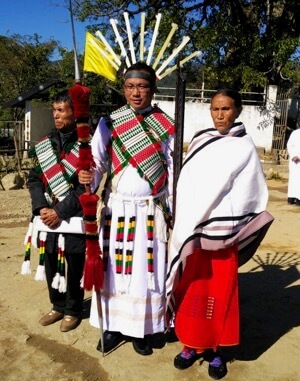 Fr. Stephen was ordained by the Most Rev. Dominic Lumen, Archbishop of Imphal, in a Mass at Our Lady of Victory Church in Makhel. He became the first priest for the Congregation ordained from the State of Manipur.

As part of his Ordination Mass, Fr. Stephen was escorted into the ceremony wearing traditional attire and participating in a dance that comes from the region. Then, during the Offeratory, the Sunday school children led a choreographed procession that moved many people.

A short celebration followed the Mass, where the invited guests, including Holy Cross confreres, friends, and family were able to congratulate the newly ordained. Then the celebration continued with a delicious meal.

As a newly ordained priest, Fr. Stephen will continue working in the same parish in Champhai, Mizoram, where he served as a deacon.

“I wish to be a committed priest and a loving priest to bring the Goodness of Jesus Christ through my life and words,” said Fr. Stephen. “And above all, [I wish to] live my life as per our Constitutions.” 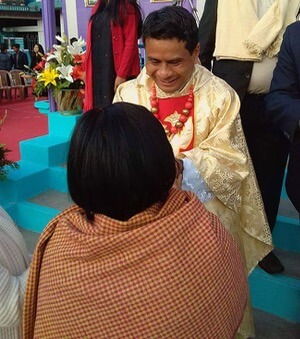 The last of the Ordination’s was Fr. Arbok’s on January 14. Fr. Arbok is a member of the Khasi tribe from the state of Meghalaya. He became the fifth priest from the Khasi community ordained for Holy Cross.

Fr. Arbok was ordained by the Most Rev. Dominic Jala SDB, Archbishop of Shillong. He was ordained along with three other priests from the Diocese in what was a great moment of joy for the local Church.

There was a grant reception following the Ordination at Holy Cross Students’ Home, Brookdene. Many parishioners from Holy Cross parishes in the region, as well as Fr. Arbok's home parish, joined Fr. Arbok's family, relatives, and Holy Cross religious to participate this great event.

Fr. Arbok celebrated his First Mass the following day, January 15, in his village lyngkhoi at St. George Church, which is part of Wahlang Parish. He will now begin his priestly ministry in the Congregation serving as the Associate Pastor at Immaculate Conception Parish in Moharpara.

"Let us pray that [the newly ordained] may become true witnesses of the Gospel to spread the kingdom of God wherever they go, and that they may be ever faithful in serving the Lord who called them," said Fr. Robert Mathias, C.S.C., Superior of the Province of North East India.

Due to a change in the Congregation’s initial formation program in India, there will be no final vows or ordinations celebrated this year in India. Previously, men in formation for the priesthood in Holy Cross took their Final Vows and were ordained deacons during their third year of theological studies. Now, with the change in the program, they will take their Final Vows and be ordained deacons only following the completion of their fourth and final year of theology. 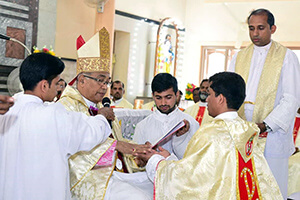 These six ordinations this year, as well as the large classes of men in formation in the pipeline, speak great hope to the future of the mission of Holy Cross not only in India, but beyond.

Special thanks to all the newly ordained as well as Fr. Shiju Joseph, C.S.C., for their assistance with this article.