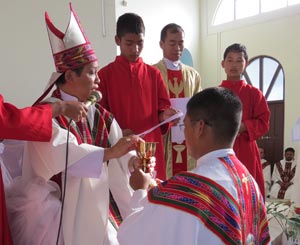 Yesterday, December 30, Rev. Daniel Kurbath, C.S.C., was ordained to the priesthood in Mairang, Meghalaya. He was the sixth priest ordained in India for the Congregation of Holy Cross in just over a month.

The Ordinations were spread over a five week period in November and December as the Congregation's tradition in India is to celebrate Ordination Masses in the home parishes and villages of those being ordained.

This series of priestly ordinations began on November 26, 2012, in Mariapiuram, Kerala, with Rev. Arun D., C.S.C. Less than a week later, on December 1, in Trichy, Tamil Nadu, Rev. Arokiasamy Innaci, C.S.C., was ordained. 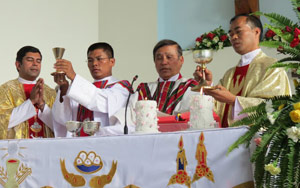 Rev. Daniel Munga, C.S.C., was ordained December 15. The ordaining bishop was a Holy Cross bishop, the Most Rev. Stephen Rotluanga, who is the Bishop of Aizawl. The Mass took place in Champai, Mizoram.

Explore a Photo Gallery of Ordinations from Around the World