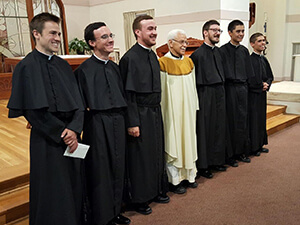 On Saturday, July 30, at Sacred Heart Parish in Colorado Springs, Colorado, in the United States, six Holy Cross novices made their First Profession of Vows in the Congregation of Holy Cross. All six are members of the United States Province, and their vows were received by Fr. E. William Beauchamp, C.S.C., Assistant Provincial and Steward of the Province.

The six men who made their first profession were: Cameron Cortens, C.S.C., Paul Fortin, C.S.C., Robert Lisowski, C.S.C., Geoffrey Mooney, C.S.C., Charlie Skinner, C.S.C., and David Smith, C.S.C. All six newly professed are in formation to be religious priests in the Congregation.

In the week leading up to their First Profession, the six participated in a pre-profession retreat led by Fr. Nicholas Ayo, C.S.C. Fr. Ayo was actually the first Novice Master at the Holy Cross Novitiate, Marigreen Pines, in Cascade, Colorado, when the Novitiate was moved there in 1978. He also taught for many years as a member of Faculty of the Program of Liberal Studies at the University of Notre Dame in Notre Dame, Indiana.

Learn more about the charism of Holy Cross 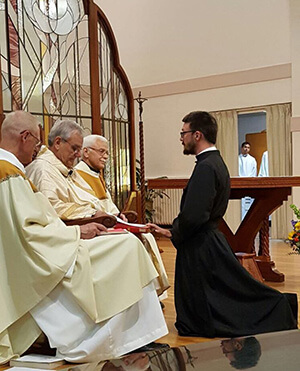 Fr. Ayo's theme was one of gratefulness for all that we have and all that we have received.  In exploring the inner narrative of the Biblical characters, he invited the novices to enlighten their minds and enkindle their hearts in anticipation of their First Professions.

On the morning of their First Profession, the novices and their staff went to Holy Rosary Chapel in Cascade (one of the two chapels associated with Sacred Heart Parish) for an hour of Adoration. Then they traveled together down Highway 24 in the Ute Pass to go to the Mass in Sacred Heart Parish, which is administered by Holy Cross.

Along with several of their brothers in Holy Cross as well as members of their own families, many people from the Colorado Springs and surrounding communities came to the Mass to see these men profess their vows. Many were parishioners from Sacred Heart Parish and Our Lady of the Woods in Woodland Park, Colorado, where the novices served on Sundays during their Novitiate.

In his homily, Fr. Ken Molinaro, C.S.C., Novice Master, spoke with the novices how their journey in Holy Cross began with a call that led them to listen more deeply and attentively to the Lord who loved them. This listening then grew into a response, what Fr. Molinaro called the second step in discipleship: "Here I am, Lord, send me."

Explore a vocation in Holy Cross

"And so we reach the third and most exciting, but also most difficult step in discipleship: being sent!" preached Fr. Molinaro. "Most exciting because we think it is why we came into religious life, to serve the people of God! But it is truly most difficult, for in our being sent, we must never forget the One who is sending us. 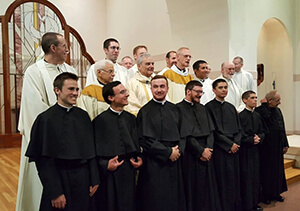 "It is from your profession of vows this morning that the Lord through the Congregation of Holy Cross then sends you forth," he continued. "Your immediate ‘mission’, your first ‘official’ obedience is that of studies at Notre Dame. But never lose sight of your ultimate goal: Union with Christ. For our work, our mission is His, not our own."

Fr. Molinaro added, "Always remember, my brothers, in being ‘sent forth,’ you first and foremost are the message—before anything you say or do—to be Christ’s presence to those to whom you are sent. Remember the ‘seamless’ garment. Let your life in all its fullness speak!"

The newly professed now head back to Moreau Seminary at the University of Notre Dame where they will continue their initial formation for the religious life and priesthood in the Congregation.

It is a short break for Fr. Molinario and the rest of the Novitiate Staff: Fr. Don Dilg, C.S.C., Assistant Novice Master; Br. James Blaszak, C.S.C., the Novitiate Procurator; and Fr. Michael Couhig, C.S.C., Novitiate Staff Member. Six new novices will arrive next week. Five are from the United States Province (Notre Dame, Indiana), and one is from the Moreau Province (Austin, Texas).

"The Good Lord has graced me with three great novice classes," said Fr. Molinaro. "We have been most richly blessed, so I am looking forward to another great class of novices!"