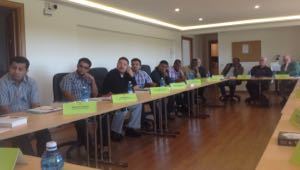 From Monday, April 20, to Thursday, April 23, the General Administration hosted a special meeting in Rome, Italy, of 16 young Holy Cross brothers and priests from around the world. The meeting’s purpose was to discuss the vocation of the Holy Cross brother in light of the Blessed Basile Moreau’s vision to unite religious brothers and religious priests in a single congregation. 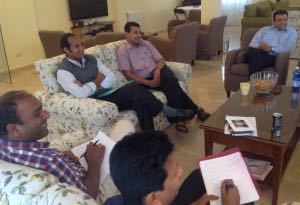 Fr. Richard V. Warner, C.S.C., the Superior General, opened the meeting on the morning of Monday, April 20. In his introductory remarks, Fr. Warner underscored the Congregation of Holy Cross’s founding charism as a religious congregation “composed of two distinct societies of religious, one of religious priests and one of religious brothers, bound together in one indivisible brotherhood” (1:6). He stated that this vision gives Holy Cross a unique character and mission in the Catholic Church.

Fr. Warner said that the mission of the Congregation has reached a critical juncture, given the decline of the number of religious brothers not only in Holy Cross, but also in the wider Church. He expressed his hope that young brothers and priests at the meeting would be able to help chart a path forward for the Congregation, and especially for the Holy Cross brothers, by studying the founder’s vision, reflecting on their own experiences, and reading the signs of the times. The timing of the gathering was important, Fr. Warner added, as the Congregation will be meeting in General Chapter in the summer of 2016. 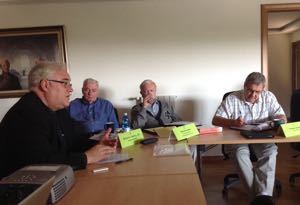 Fr. David Guffey, C.S.C., the National Director of Family Theater Productions, which is a part of Holy Cross Family Ministries, followed Fr. Warner in addressing the gathering. Fr. Guffey spoke on Blessed Basile Moreau and his vision for the Congregation and specifically the religious brothers in Holy Cross. After his presentation, the priests and brothers split into discussion groups by society in order to reflect on questions given them by Fr. Guffey.

In the afternoon, Br. Thomas A. Dziekan, C.S.C., the Vicar General of the Congregation, shared some personal reflections with the group on his 48 years as a religious brother in Holy Cross. He focused his reflection on the principle that a religious brother is defined less by what he does, than by who he is in relationship with others and with Jesus. Again, those in attendance split into groups by society afterward to continue their reflections and conversations.

The next day, Tuesday, April 21, Br. Patrick Sopher, C.S.C., the Executive Director for Congregational Planning, gave a brief presentation on the history and statistical realities of the brothers’ vocation within both Holy Cross and the wider Church. He also provided a framework for some of the particular questions facing the Congregation, including the principle of parity, dating back to Moreau, in which brothers and priests are equally represented both on the General Council and in the General Chapters.

This time, the attendees split into mixed groups of both brothers and priests to reflect on the questions offered by Br. Sopher. These conversations continued into the afternoon.

In reports back to the whole group, there was a clear consensus among the young brothers and priests on the essential presence and role for religious brothers in the Congregation. There also was general agreement that collaborative vocational promotion and common formation programs are the key first steps in renewing not just the brothers’ vocation, but the wider Congregation in living and working together in mission. It was posited that these steps could also pave the way for greater structural changes in the future that would make collaboration among priests and brothers and across international borders more sustainable and fruitful.

“I like how Father Warner expressed it: ‘without religious brothers, there is no Holy Cross,’” said Br. Gomes from Bangladesh. “This was the dream of Father Moreau, that we would be a unique community of brothers and priests in one indivisible brotherhood. I am hopeful for the future and our ability to fulfill that dream.” 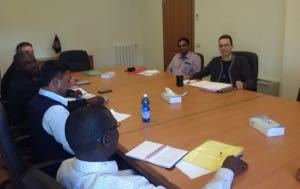 The third day, Wednesday, April 22, the meeting turned to look at the Constitutions of the Congregation of Holy Cross and what specific steps of renewal could be taken to live the Constitutions more faithful. Again, there were energetic conversations in the smaller groups and in the plenary session. A common theme was the essentiality of common life shared by religious brothers and religious priests, including common table, common prayer, and common work.

The afternoon then was devoted to the specific issue of international houses of formation and their potential role both in fostering a more united congregation and in renewing the brothers’ vocation. Although the attendees named and discussed various hurdles that would need to be addressed, there was general support for this endeavor. They mentioned how relationships formed by men in their initial formation can strengthen the community and mission well into the future.

The 16 young brothers and priests pointed out that this meeting itself is an example of how bringing together members of the Congregation from around the world starts forging friendships that lead to a true breaking down of barriers and a real crossing of borders.

“It was really wonderful to meet people from around the globe,” said Br. Gomes. “It means a lot for Holy Cross to have this international exchange. We learn much from each other.” 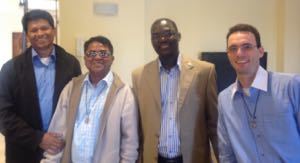 “This time I have seen more bonding between the brothers and priests,” said Br. Patrick Tumwine, C.S.C., from the District of East Africa, who attended the first Holy Cross Forum in 2012-2013, which brought together young brothers and priests from across the Congregation. “There have been very encouraging conversations among us that have strengthened me in my vocation. It has been a powerful experience. We have been able to discard the previous boundaries that at times separate us as priests and brothers, and we have been able to interact as one. It is a great hope.”

Another common refrain among those in attendance was their coming to a deeper appreciation of not only what is shared in common across the various regions of the Congregation, but also the unique challenges and opportunities facing each particular region.

“This has been a great experience,” said Fr. Binoy John, C.S.C., from the Province of North East Indi. “I have had the chance to meet many great people as we cross borders together and come to understand one another. It has enlightened my heart and mind and has prepared me for greater ministry in Holy Cross in the future.”

The 16 young brothers and priests spoke of leaving with a greater hope for the Congregation as it seeks to carry the gospel joyfully into the world. The same wellspring of hope was expressed by the Congregation’s leadership.

“It was a great joy to receive and host in the Generalate eight young religious brothers and eight young religious priests from across the Congregation to share on the essential presence, role, and nature of the Holy Cross brother,” said Fr. Warner. “The coming together of these young men was encouraging and hopeful, especially as we approach the 2016 General Chapter and work together for our preferred future.”