I can’t get this picture of Brother André out of my mind: a small man with thinning hair, dressed in a worn black cassock, sitting in a chair inside the front door of a secondary school. He’s holding a rosary in his hands, and it seems misplaced for some reason, cupped as it is by callused, weathered fingers. They are the hands of a working man accustomed to gripping steel and stone and leather and wood and not polished beads. 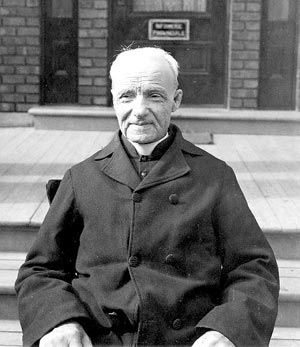 He tends to doors and hallways and herds of boys that pass him, coming and going, and to mail and bells and horse and buggy which he uses to ride downtown to pick up the boy’s laundry. To and from the post office he visits the sick in their homes and leaves them with soothing oil he believes St. Joseph has blessed, and, with the oil, a bit more hope. He builds a chapel on Mount Royal which will become a church which will become a massive oratory that he will dedicate to St. Joseph. He stays up long into the night and prays, prays, prays, even though his stomach pains him. He is what happens, apparently, when you fuse grit to hope: kinetic, holy energy housed in the flesh and bone and blood of a diminutive Canuck.

He’ll live into his nineties and millions will call him “The Miracle Man of Montreal.”

This, I’m sure, embarrasses him.

“I’m sending you a saint!” his pastor wrote in a letter addressed to the Holy Cross brothers in Montreal years earlier when Alfred Bessette came calling. What an introduction. We all know what happens. It reads like a Hollywood script. Orphaned boy barely able to read or write decides he wants to be a Holy Cross brother—a community of religious brothers dedicated to St. Joseph. He asks to enter their novitiate—a place where one’s physical and spiritual mettle is tested—and his superiors, having calculated that he will cost more to keep alive than he will ever earn by his wits or sweat, tell him no. He persists, enlisting the help of the bishop of Montreal no less and, finally, even his novice master, Fr. Guy, (someone should put a gold plaque up somewhere in his honor) comes to his senses and says that Brother André can stay. He figures, at the very least, the young man knows how to pray.

They say over a million people passed his casket that week of his death in 1937.

We are told Alfred chose ‘André’ for his religious name in gratitude to Fr. André Provençal, the parish priest who encouraged his vocation and introduced him to Holy Cross. And that sounds about right. But I think of St. Joseph now, and of how little we actually know about him, and I begin to understand now what made Brother André tick, what gave him his raison d'être. 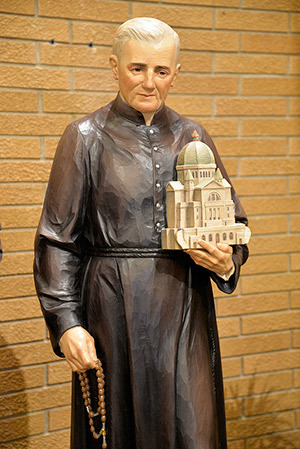 We say Joseph was a carpenter—a worker of wood whose hands mirrored a tough, resilient heart. We see him with hammer and lathe and saw, quietly going about his day supporting his wife and boy, his sweat and achy bones and muscles testifying to the power of love. He, like André, was probably illiterate. He stuck by his betrothed when the hint of scandal hovered over her—urged on by an angel’s voice—and so played his supporting role in the great drama of salvation history. He left behind no theological tract, no confession, no gospel, no army of disciples. All we have is his yes. And, I have to believe, the indelible imprint of his goodness pressed upon the heart of his boy who would become the savior of the world.

Meet some of the saintly members of Holy Cross

So much hullabaloo that week in 1937 in Montreal when a little brother died. A million-plus walked by his coffin, catching a glimpse of gritty holiness, paying last respects to a man they knew as a saint. And he was—and is—a saint. But what I see now (and perhaps this is what a saint actually is, always) is a man who woke up every morning—like St. Joseph—grateful to be on the planet and eager to get to work. For André, it was opening doors and ringing bells and getting mail and laundry and visiting sick folk and giving them hope, and praying, praying, praying.

At the very least, he knew how to pray.

This reflection for the feast day of St. André Bessette, the first canonized saint of the Congregation of Holy Cross, was written by Fr. Patrick Hannon, C.S.C., an Instructor at the University of Portland in Portland, Oregon, in the United States.