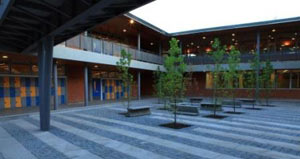 Saint George´s College in Santiago, Chile, inaugurated a new building named for the founder of the Congregation of Holy Cross, Blessed Basile Moreau. The new building, which totals 2,800 square meters, will be used for students at the high school. It has 10 classrooms for juniors and seniors, a teachers’ lounge, and seminar and study rooms. The building also has five English labs, as St. George’s specializes in teaching its students English as part of their wider curriculum.

The Basile Moreau Building was blessed June 11 by Rev. James McDonald, C.S.C., Assistant Provincial of the United States Province of Holy Cross. Also present at the ceremony was Mr. Raúl Torrealba, a 1966 alum of the school and currently the mayor of the Vitacura, the suburb of Santiago in which St. George’s is located. They were joined by Rev. Michael DeLaney, C.S.C., the Superior of the District of Chile, Rev. José Ahumada, C.S.C., the Rector of St. George’s, and Mrs. Isabel Deves, one of the building’s architects. 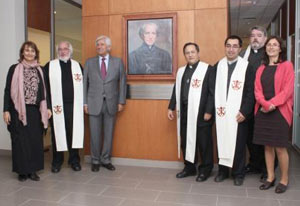 "While the Basile Moreau Building was another step in the Master Plan developed over 10 years ago, in other more significant ways it was the clearest sign that the return of the Congregation to St. George's in 1986 after the military intervention was complete," said Fr. McDonald, referring to the 13-year takeover of the school by the government of Augusto Pinochet, beginning in 1973. "Both the infrastructure and the academic and formation program of the school are, now, fully Holy Cross, continuing a tradition of excellence begun when the first three Holy Cross religious arrived on March 1, 1943.

Learn more about the history of Holy Cross in Chile

"The inauguration was filled with emotion, as it was the last work of one of the architects, Andres Elton, who was himself, a 1970 graduate of St George's. His wife, Isabel Deves, who was the other architect of the building, was there with her children to mark the occasion." 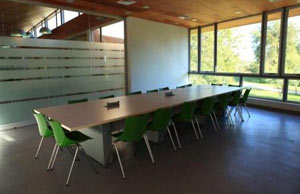 Saint George´s College is a pre-kinder to 12th grade school in Santiago, Chile, owned and administered by the Congregation. It recently celebrated its 75th anniversary. Today, the school has 2,600 students and is known as one of the premier Catholic schools in the country, respected both for its academics and its faith formation.