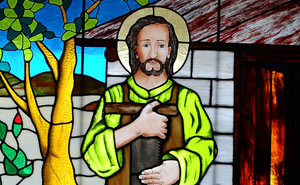 St. Joseph comes across to us as a model of many virtues. He was an authentic person who showed by his simplicity that he was not afraid because he knew God was with him. He was not controlled by external forces. He faithfully and joyfully attended to the little but fundamental things of caring for Mary and Jesus. In his simple lifestyle, he was rich in relational trust with the Father to whom he utterly surrendered himself. Of all his virtues justice, simplicity, and integrity are the featured ones.

St. Joseph is the patron of social justice in the Church because of his righteousness. He followed all laws that came from God. He made justice a practical way of living out love for others. He fulfilled his divine assignments because he was a man of justice. St. Joseph was fair to his companions, to his family members, and to society. God guided him in judging what was right and what was wrong, and he stood for right; for example, he took Mary as his wife.

Learn more about the patrons of Holy Cross

St. Joseph fulfilled the social and moral obligations towards Mary and Jesus as a righteous person. He held together his family notwithstanding heavy pressures in the society. The word “dharma” comes from the Sanskrit root “dhr”, which means “to hold together”, “to unite”, “to integrate”. Joseph became the patron of the universal Church because he held the universe together, making it the Kingdom of God. Joseph had an ethical virtue that made him carry out the duties of his life situation based on social justice, that made him submit to God whence love of God and neighbor followed. Through his integrity and justice St. Joseph exercised his faith in God by responding to every law.

St. Joseph was a man of wisdom—the wisdom flowing from integrity. Being integrated around human principles, he became humble and courageous. His humility acknowledges that God governs the plan of salvation—not us, not our being in charge of this world and governing it. Due to his integrity, St. Joseph defended Mary and courageously accepted her as his wife. He understood Mary with empathy and gave her social and human dignity—validating her rightful status as mother of God. 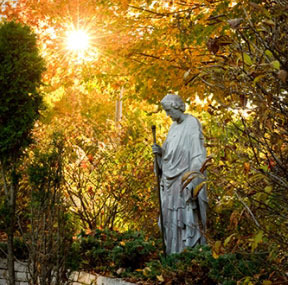 St. Joseph stood at the intersection of caring, transcendence, and connectedness in the Holy Family where Jesus was groomed and grounded with empathy and love. In all his trials and uncertainties, he was a proactive leader—leading the family toward a fully human life. Caring is the fundamental and intrinsic law for a family’s growth and St. Joseph did it aptly. St. Joseph gave plentiful caring to Mary and Jesus in their trials and challenges. As a result they felt secure and they flourished. He was sensitive and responsive to Mary and Jesus, which made him go beyond himself, thereby becoming transcendent. In his connectedness he understood them, and looked out for their welfare. Joseph loved God first. He loved Mary and Jesus above himself and left us a legacy of self-emptying—a paradigm of transcendence and a beacon of justice.

This reflection for the Feast Day of St. Joseph, the patron of the Holy Cross Brothers, was written by Br. Subal Rozario, C.S.C., who is the Third General Assistant of the Congregation.