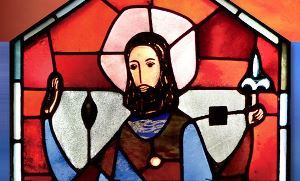 I have often been asked why Saint Joseph had such a great importance for Saint Brother André. We can certainly speak of the importance of St. Joseph for Canada, or of the place of St. Joseph in the devotional life of French Canadian families but we can equally say that Br. André found in Holy Cross a fertile ground to develop a spirituality that gave a prominent place to St. Joseph. I want to share with you a few elements of the devotion to St. Joseph as it evolved in Holy Cross, starting from the very early days when Fr. Basile Moreau accepted responsibility for the Brothers of Saint Joseph.

In Father Moreau’s life and teaching

From the very beginning of the Congregation, St. Joseph had been seen as an important figure. Blessed Moreau often referred to him as “our glorious patron,” our “holy patron” or the “incomparable patron of our Congregation.” He certainly kept in mind that the group of religious entrusted to him were called the “Brothers of Saint Joseph.”

In his early letters, Fr. Moreau often spoke about St. Joseph in the context of the Holy Family. Seeking more solidarity in his community, our founder saw the unity between Jesus, Mary, and Joseph in the Holy Family, as a model for Holy Cross brothers, priests, and sisters.

Learn more about the patrons of the Holy Cross family

Fr. Albert François Cousineau, C.S.C., who was Superior General from 1938 to 1950, explains how this approach of the Holy Family is an essential element of Father Moreau’s spirituality. He writes, “It is important to come back to what we can call the very soul and the mystical inspiration of the spirituality of our Congregation. Let us sum up this mystical vision. It is incorporation in Christ. The earthly model proposed by Father Moreau in his circular letter of September 1841 is the Holy Family. The fruit that can be expected from our faithfulness to this ideal is the union among us modeled on the union of the three persons in the Holy Trinity.” 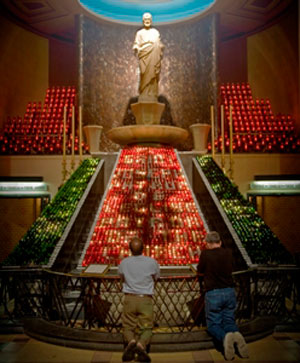 St. Joseph was, however, most often seen as the one to whom we go to receive God’s favor and protection. Holy Cross religious were invited to pray to St. Joseph asking for his support in all aspects of their lives. Following spiritual authors of his time, Fr. Moreau often used the Latin expression “Ite ad Joseph,” (“Go to Joseph”) as he invited people to ask for the help of St. Joseph.

The words “Go to Joseph” refer, in fact, to Joseph the son of Jacob in the Old Testament. In the book of Genesis (Gen. 42, 55) these words are found as an instruction given by the Pharaoh to the Egyptian nation, bidding them to go to Joseph his vizier who would answer all their needs. In devotional instruction at the time of Fr. Moreau, it appeared as an invitation to pray to St. Joseph because he also can answer our prayers. In one of his sermons, Fr. Moreau after mentioning the expression “Ite ad Joseph” added, “Implore Saint Joseph and he will open to you the treasures of divine grace.”

In his circular letters, he regularly invited the members of the community to give particular attention to the devotion to St. Joseph. In his letter of February 6, 1861, he explained at greater length the importance of this feast. In his circular letter for the month of St. Joseph in 1861, he hoped to set up a place of pilgrimage to St. Joseph. He writes, “How happy I would be if, in our Solitude at Chardonnière, I could establish a place of pilgrimage in honor of this worthy spouse of the Queen of Virgins…” (p. 373). 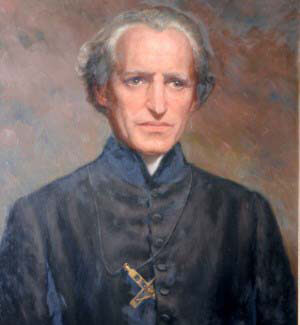 Father Moreau also saw Saint Joseph as a model of life. In his circular letter, Father Moreau wrote, “It is not enough merely to call upon him, we must foster devotion to him and above all imitate his virtues…”  (Circular Letter 138). His chaste relationship with the Virgin Mary is a model of chastity for religious. His readiness to respond to the mission entrusted to him, his obedience to the call received from God encourages religious to have the same attitude of obedience to God and the same zeal to do the will of God.

St. Joseph is also a model of humility and poverty. Fr. Moreau said, “Saint Joseph who was so noble by reason of his ancestry and so eminent because of the mission entrusted to him, lived a humble life earning his bread in the sweat of his brow…” (Circular Letter 138).

Fr. Edward Sorin, C.S.C., Superior General from 1868 to 1893, continued this tradition of devotion to St. Joseph. He spoke of St. Joseph as a model but he viewed St. Joseph particularly as a protector for the work of Holy Cross. This is very clear in the difficult moment after the fire that destroyed the Main Building of the University of Notre Dame in 1879. As he undertook the new construction with very limited financial means, he placed his confidence in St. Joseph, convinced that with his help the work would be completed.

As Holy Cross spread out and developed many educational institutions, Fr. Sorin invited the religious to foster devotion to St. Joseph particularly during the month of March; in a circular letter of 1869 he insists on the importance to celebrate with solemnity the month dedicated to St. Joseph, our patron. He gives specific instructions on the way to celebrate the month of St. Joseph: “In each class we will use the minutes at the end of the day to offer special prayers to Saint Joseph and in each class room there will be an altar with a statue or a picture of St. Joseph.”

The figure of Brother Andre and Saint Joseph Oratory

Fr. Gilbert Français, C.S.C., Superior General from 1883 to 1926, continued in the same tradition but it was during his term as Superior General that a new dimension of the devotion to St. Joseph in the Congregation of Holy Cross appeared with the founding of Saint Joseph’s Oratory. In 1918, when the Crypt Church was inaugurated at the Oratory, he wrote a letter to the superior of the Oratory, expressing his joy to see the manner in which Saint Joseph was honored in Montreal. He does not refer directly to Br. André, but he shows his belief in the importance of the shrine. While expressing his joy and his support, he says nothing of Br. André. It is only after the death of the founder of the Oratory that his name will be celebrated. 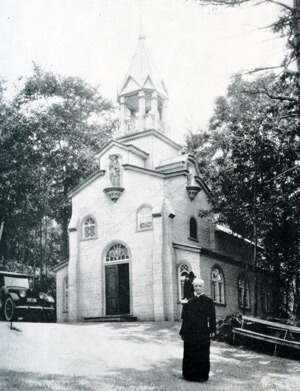 In 1937, Fr. James Donahue, C.S.C., as Superior General mentioned the name of Br. André, but his comment is directed toward the importance of the devotion to St. Joseph for Holy Cross. He writes, “I have felt for some time now the need to encourage all our religious to deepen and intensify their devotion to Saint Joseph. I am convinced that it is God’s will. We are called to this as a community as well as individual members of the community…” Later he adds, “May the death of our Br. André and the return of the month of March be for us an occasion to renew our devotion to St. Joseph."

In 1938, Fr. Cousineau was elected Superior General. At the time of his election, he was superior of St. Joseph’s Oratory. He had accompanied Brother André during the last days of his life. It was natural for him to continue this tradition of devotion to St. Joseph and to see this devotion in its relationship with Br. André and the development of St. Joseph’s Oratory.

In following years, when the process leading to the beatification and canonization of Brother André progressed, the devotion to St. Joseph and to Br. Andre became more and more common.

Since the time of its foundation, Holy Cross has always been exhorted to give an important place to St. Joseph as a model and a powerful intercessor before God. As we celebrate the feast of this great saint, we are all invited to imitate him and renew our commitment to dedicate our life to the mission God has entrusted to us.

St. Joseph is for us a guide and a protector.

This reflection for the Solemnity of St. Joseph, the Patron Saint of the Holy Cross Brothers, was written by Fr. Claude Grou, C.S.C. Since serving as Superior General of the Congregation from 1986-1998, he has worked at St. Joseph's Oratory in Montreal, Canada, where he currently serves as Rector.