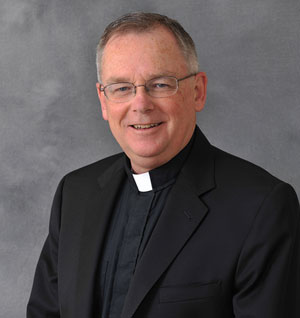 Stonehill College has named Rev. John Denning, C.S.C. as its tenth president following a unanimous vote by its Board of Trustees on Friday, May 17. Currently the Vice President for Student Affairs at the College, Fr. Denning will assume the presidency on July 1, from Rev. Mark T. Cregan, C.S.C. Fr. Cregan steps down after 13 successful years as President of the Catholic liberal arts college, which was founded by the Congregation of Holy Cross in Easton, Massachusetts, in 1948.

Following the announcement, Fr. Denning cited his "desire and passion to work on building Stonehill's strengths and meeting the challenges that confront the College's community of scholarship and faith. These include furthering our strong academic reputation, deepening our commitment to diversity and enhancing our Catholic character."

Since 2007, Fr. Denning has guided Stonehill's Student Affairs Division. Prior to that, he served as the College's first Vice President for Mission, establishing that division and launching initiatives to enhance Catholic identity at the College. Fr. Denning began his service at the College in 2000 as its Director of Campus Ministry. 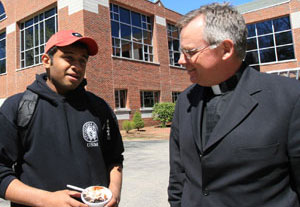 "With understated confidence, Fr. John has devoted his life to serving Catholic education," stated Rev. Thomas O'Hara, C.S.C., Provincial Superior of the Congregation's United States Province. "In particular, he appreciates the history and the importance of collaboration between Holy Cross priests and brothers and our lay partners and the power of that partnership as we move forward as a community.

"We welcome Fr. John's election as president and have faith the Holy Spirit will continue to bless Fr. John and Stonehill."

Stonehill College is one of the Congregation's six colleges and universities in the United States. Holy Cross shares governance at its educational institutions with its lay collaborators to fulfill the Congregation's charism as Educators in the Faith.

Watch a video profiling four of the Congregation's U.S. colleges and universities