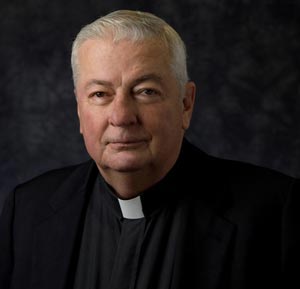 Rev. Richard V. Warner, C.S.C., Superior General of the Congregation of Holy Cross, was the featured speaker at the 46th Commencement Exercises of Holy Cross College, in Notre Dame, Indiana, on Saturday, May 11, 2013.

"Fr. Dick Warner, Superior General of the Congregation of Holy Cross, is also a personal friend of the college," said Holy Cross College President, Br. John Paige, C.S.C. "In his years as Director of Campus Ministry at the University of Notre Dame, he facilitated many collaborative events between UND and Holy Cross. We are delighted to be able to honor him and recognize his extensive ministry in the Congregation of Holy Cross by awarding him a Doctor of Humane Letters, Honoris Causa." 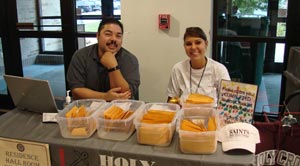 In his remarks at the Pfeil Center on campus, Fr. Warner spoke about the divisions that exist within the world and within the United States. He challenged the 2013 graduates to work intentionally to overcome those divisions and build a greater union among people. As models and signs of hope, Fr. Warner held up the newly elected Pope Francis as well as the Holy Cross brothers who administer and teach at Holy Cross College.

"Here at Holy Cross College, the Holy Cross brothers have carried out this model for you and many of your fellow students," said Fr. Warner. "The brothers here now and those who preceded them, have developed a family spirit for you, which they do everywhere they are in the world.  They have been your friends, teachers and guides. They have prayed with you, and they have prayed for you and for your success now and into the future.  They have provided for you a firm basis, rare solid ground in a divided and contentious world. They have created for you a place of welcome and challenge regardless of your background, of the way or places where you worship and pray."

The 2010 General Chapter elected Fr. Warner the 12th Superior General, succeeding Rev. Hugh W. Cleary, C.S.C., who had served two six-year terms. Immediately prior to his election as Superior General, Fr. Warner had been serving as Director of Campus Ministry at the University of Notre Dame in Notre Dame, Indiana.