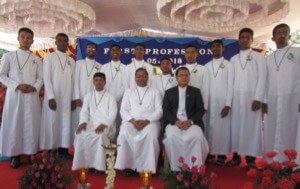 The Congregation of Holy Cross in India had great cause to celebrate on May 28, 2018. Ten young men professed their First Vows on this day at the Holy Cross Novitiate at Yercaud after completing their canonical year of formation there. Among the 10 are three of the Vicariate of Tamil Nadu, two of the Province of South India, while the remaining five are of the Province of North East India. 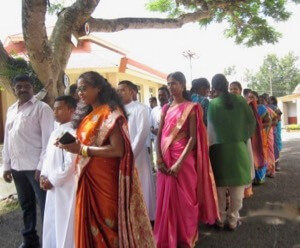 Fr. Mariaraj presided at the Mass, and Fr. Joby Sebastian, C.S.C., who preached a weeklong discernment retreat for the novices prior to the First Profession, was the homilist. The Mass was attended by many of the young men’s confreres, friends, and relatives, as well as a number of local religious and clergy. Following the Mass was a festive lunch to continue the celebration.

Six of the newly professed were assigned for their pastoral years in their respective jurisdictions, while two will be making an apostolic community experience in the North East. The remaining two newly professed will be going to Holy Cross Seminary in Pune, where one will study philosophy and the other theology.

Learn about Holy Cross in India

This group of 10 first professions is the last class of novices for Fr. Alexander Susai, C.S.C., who completed seven years as Novice Master. He has now gone to serve as local superior and administrator of Holy Cross School in Somarasampettai in the Vicariate of Tamil Nadu. 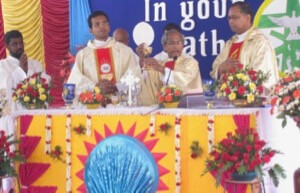 Replacing Fr. Susai is Fr. Sebastian, who is from the Province of South India. He was officially installed as the new Novice Master on June 5, 2018, in a Mass presided by Fr. Justin Diraviam, C.S.C., the Superior of the Vicariate of Tamil Nadu.

Fr. Sebastian already has hit the ground running as Novice Master, as a new class of 15 novices was already received into the Novitiate back on May 15, 2018, prior to the First Profession Mass. They will be completing their canonical year under his tutelage.

Special thanks to Fr. Justin Diraviam, C.S.C., for contributing to this article.