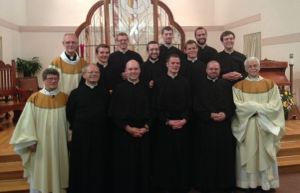 On Saturday, August 2, 10 novices from the Holy Cross Novitiate in Cascade, Colorado, made their First Profession of Religious Vows in the Congregation of Holy Cross. All 10 newly professed are members of the United States Province of Priests and Brothers, making it the largest profession class for any single jurisdiction in the Congregation this calendar year.

Explore a vocation to the Congregation 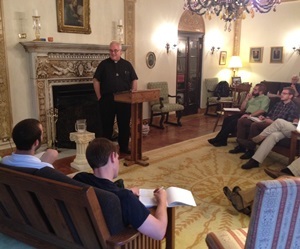 To draw their Novitiate year to a close and help prepare them for their First Vows, the men participated in a retreat the week leading up to Profession. The retreat was led by Fr. David Guffey, C.S.C., the National Director of Family Theater Productions and himself a former novice master at Cascade. The retreat began on Sunday and concluded Thursday afternoon as the novices’ families began to arrive for the weekend.

The weekend’s prayer and festivities began in earnest Friday night, August 1, with Mass at Holy Rosary Chapel, one of the three churches that belongs to the Congregation’s parish in Colorado. Fr. Ken Molinaro, C.S.C., the Novice Master, presided, while Fr. Don Dilg, C.S.C., the Assistant Novice Master, preached. The Mass included the blessing of the religious habits the novices would receive the next day at their First Profession.

Following the Mass, the Novitiate community gathered with the novices’ families and other Holy Cross religious for a barbeque at the Novitiate. 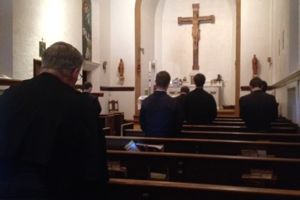 Prior to their First Profession on Saturday, August 2, the novices, their staff, and other Holy Cross religious spent an hour in prayer with the Blessed Sacrament at Holy Rosary Chapel. The Mass of First Profession was held at Sacred Heart Church in Colorado Springs, which is the main church for the Congregation’s parish in Colorado. The Church was full not only with members of the novices’ families, but also parishioners from the parish and the other ministries where the novices had apostolic placements this past year.

Fr. Rick Wilkinson, C.S.C., the Vicar and First Assistant Provincial of the United States Province, presided at the Mass and received the vows of the 10 men. Fr. Molinaro preached.

In his homily, Fr. Molinaro began by reminding the men of their time in the Novitiate: "Your year at the novitiate has been, so to speak, a spiritual odyssey, experiencing the many faces of love. It’s about coming to an ever deeper appreciation of the love of parent and family guiding to this moment, the warm and accepting embrace of those to whom you were sent, to the day-to-day comfort and struggles in dealing with the daily routine, and the joys as well as the set-backs and disappointments that are simply the 'stuff' of everyday life!" 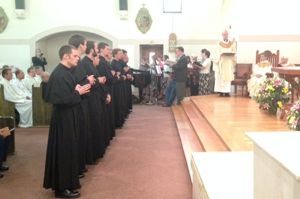 Fr. Molinario continued speaking about the commitment the men were making in professing the Religious Vows of poverty, chastity, and obedience according to the Constitutions of the Congregation of Holy Cross: "My brothers, the life you are vowing this day is truly the work of the Holy Spirit, leading and guiding you as you seek to conform your life to Christ. Trust the gentle -- and sometimes 'not so gentle' -- process of spiritual conversion and growth taking place within you.

"The vows you profess call for an openness to change, to growth -- an inner conversion, if you will. It’s about opening yourself to God and to your brothers in community in a new and radical way, allowing yourself to be refashioned again and again by the mystery of God’s love present in your life -- 'forming in [you], by God’s enablement, the living likeness of Jesus Christ,'" he said.

Immediately after their Profession of Vows during the Mass, the newly professed received the Holy Cross habit as well as the Cross and Anchors as signs of their professed membership in the Congregation. Br. James Blaszak, C.S.C., who serves as the Procurator at the Novitiate, helped the newly professed put on their new habits.

Following the Mass, a reception was held in the parish’s gym. Many came from the Mass to greet the newly professed and celebrate with them. Prior to heading over to the reception, however, the novices received their first letters of obedience. 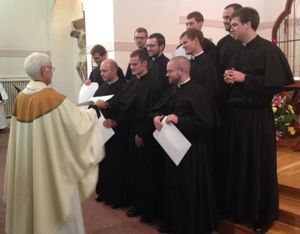 The Novitiate in Cascade now sits quiet this week, as the newly professed have journeyed back to Moreau Seminary on the campus of the University of Notre Dame in Notre Dame, Indiana, to continue their theological studies and formation. Cascade, however, will not be quiet for long as next week 12 postulants from the United States Province will arrive to begin their Novitiate year.

"The twelve incoming novices were able to spend this past year as postulants learning about Holy Cross and religious life," said Fr. James Gallagher, C.S.C., the Director of the Office of Vocations for the U. S. Province. "They are ready now to take their discernment to the next level at the Novitiate. Each step draws them deeper into consideration of God's call and allows them to find the answer to the question of whether they are being called to offer their lives as priests or brothers in Holy Cross."

Following up a large First Profession class with another large incoming class of novices is a great sign for the strength of the future of the Congregation’s mission, especially in the United States.

"It is exciting to see ten men taking their First Vows and returning to Moreau Seminary along with twelve men coming in to begin their novitiate year. It speaks to the fact that there are a good number of men who are hearing God's call and are responding. We hope that the witness of these men serves to inspire others to take that next step in seeking out God's call in their own life," said Fr. Gallagher.