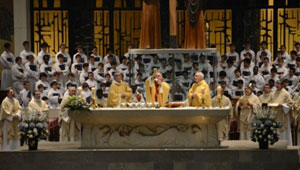 The Oratory of St. Joseph, built under the inspiration of St. André Bessette, is the largest shrine in the world to the Husband of Mary and Foster-Father of Jesus. Known as "the Miracle Man of Montreal," St. André had a great devotion to St. Joseph and attributed to him the miraculous healings worked through his ministry.

Each year, beginning on March 10, the Oratory celebrates a Novena to St. Joseph, in preparation for the Feast Day. The novena, which includes prayers and Masses, attracts crowds of believers, who, like St. André himself, have a great devotion to the Patron of the Universal Church. 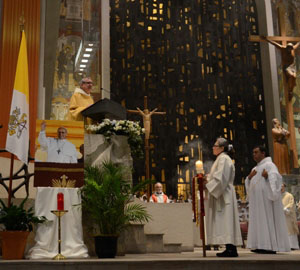 This year's novena saw the election of Pope Francis on March 13. The novena gave a perfect context to celebrate the pope's election in prayer and thanksgiving. On March 19, when Pope Francis celebrated Mass to mark the beginning of his Petrine Ministry, the liturgy was shown in the crypy of the Oratory for the pilgrims who had gathered in enthusiasm to pray for the Holy Father on the Feast of St. Joseph in this shrine dedicated to him.

Thanks to the Oratory of St. Joseph for contributing this story.