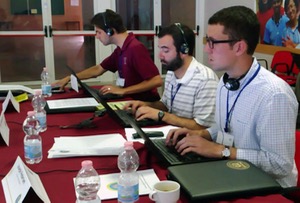 As the Congregation of Holy Cross’s 2016 General Chapter enters its second week, one of the defining marks of this Chapter is the presence of young religious from around the world.

“This is the first of the Chapters in which we will have such a strong presence of people from all the nations in which we are, but it is just the first of many, as our chapters will be more and more international from now on,” said Fr. Richard V. Warner, C.S.C., Superior General of the Congregation. “All of these people from the countries in which we serve add great enthusiasm of their own.”

For the young religious themselves, most of whom are participating in their first General Chapter, it has already been a powerful experience. Some of these young religious, like Fr. Icemick Jean-Baptiste, C.S.C., are capitulants. They, thus, will be voting in the elections of the Congregation's leadership as well as in the approval of the Chapter’s texts and legislation.

“As a young religious, to be able to participate in the General Chapter is an enormous opportunity of learning and discovery. Because of this, I feel blessed and thankful for this great chance,” said Fr. Icemick, who is part of the Committee of Vocations and Formation. “I believe that it is an ideal moment to live and understand fully the reality of the internationality of Holy Cross. To encounter brothers from so many different countries who share the same mission of Holy Cross in distinct places is gratifying and enriching. It is an opportune moment to know my brothers in Holy Cross, to share experiences with them, and to learn and inform oneself about the development of the Congregation in all parts of the world where we work." 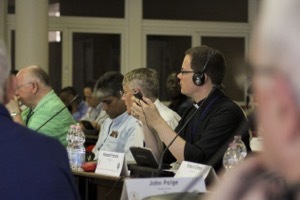 Fr. Icemick added, “I think it is also an auspicious occasion for a young religious to form part of the history of the Congregation in reflecting together with our other brothers about our life in Holy Cross and to make proposals about the development of all the community. I believe it is a great opportunity for a young religious to prepare for the future of the Congregation in terms of leadership and development."

Other young brothers and priests were invited specifically by the General Administration to add important perspectives and voices as either Observers or Periti (or Experts). While they are not able to vote in the Chapter, they add critical voices to the discussions and discernment.

Read more about the 2016 General Chapter

“It has been quite a blast these past few days, working with brothers and priests from different parts of the world to discuss important issues and the future of the Congregation,” said Br. Nich Perez, C.S.C., of the Moreau Province (in the United States) who is participating as an Observer in the Committee of Religious Life, Spirituality, and Charism. “It is quite refreshing and invigorating to meet other young Holy Cross religious who are quite passionate about the life and the mission in Holy Cross. Their stories and experiences are the toppings to sharing community with them in the next few weeks.

“The emphasis on the internationality in this General Chapter has also been an eye-opening experience that brings hope to me in living and fulfilling my vocation as a Holy Cross brother,” he added.

Similar sentiments were expressed by Fr. Julio Arias, C.S.C., from the District of Peru who is also an Observer to the Chapter. He is working with the Committee on Mission. 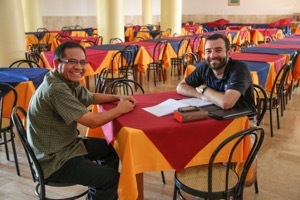 “For me the invitation to participate in this Chapter came as a surprise because I have not been ordained long. I think it's good to give a chance to young members to participate in the General Chapters because it is a time to learn from the experience of older people in Holy Cross and meet and share with members from around the world. It is important that we involve young people in responsibilities and major decisions of the Congregation to be part of its future. It is also important to have these new experiences, from our earliest years, to develop a greater understanding of Holy Cross in the world in its various apostolates,” said Fr. Arias.

A number of the young religious who are serving in the General Chapter are alumni of the General Administration’s three Holy Cross Forums.

One of the priorities of Fr. Warner and his General Council was to give more of a voice to younger members of the Congregation. To that end, over the past six years, the General Administration organized and hosted three Holy Cross Forums in Rome that brought together young finally professed brothers and priests in the Congregation from all over the world.

These Forums gave the young religious an opportunity not only to know one another and form friendships across borders of very sort, but also to learn more about Holy Cross internationally and thus better be able to lend their voices to the discernment about God’s will for the Congregation’s future. These Forums are now bearing fruit in the 2016 General Chapter.

“I had the opportunity to participate in the Second Holy Cross Forum, which helped me amplify my vision of the internationality of the Congregation,” said Br. Edson Pereira, C.S.C., of the District of Brazil who is participating as one of the Chapter’s invited Periti. “That experience led later to my interest in becoming part of the formation team of the International House of Formation in Santiago, Chile. It also contributed to my understanding of the questions of restructuring that the Congregation is living in these days.” 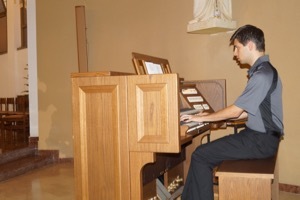 It takes a decent-sized support staff, of course, to make the General Chapter run, everything from translators and secretaries and moderators to IT personnel and hospitality coordinators. Many young religious were invited to assist in these capacities. They are working along side other Holy Cross religious who have several General Chapters already under their belts. This collaboration across the generations helps ensure the continuity for future General Chapters.

“In preparation for the Chapter, I attended several meetings with our members, and by participating in these meetings, I have come to know the overall idea of the General Chapter,” said Fr. Ashim Theotonius Gonsalves, C.S.C., from the Sacred Heart Province (in Bangladesh), who is helping with hospitality. “Really it is a wonderful experience. I hope I will gain a lot as the meeting progresses. Already I have come to know many new members of the different provinces and countries. I am getting the international mission experience by working with the international members of Holy Cross.”

Learn about the Charism of Holy Cross

In addition to the young finally professed brothers and priests, there are a number of men in formation in the Congregation who were also asked to help. In fact, one of the early highlights of the Chapter was when they renewed their Vows in the Congregation at the Mass on Thursday, July 7.

“My task here has been technology,” said Mr. Brogan Ryan, C.S.C., a temporarily professed seminarian from the United States Province. “For the first time, our chapter is going to be ‘paperless.’ I have been helping the Chapter participants get used to the website and technology that we are using to make it paperless. People have been very patient and open to this new process which is very different than how chapters have been done in the past. It has been a good experience working with and getting to know Holy Cross religious from around the world. 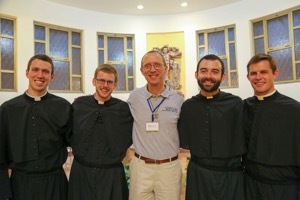 “Everyone here has accepted the responsibility of coming to the General Chapter because they believe strongly in the vision of Blessed Moreau and the work of Holy Cross in the world and want to strengthen and continue the mission of the Congregation,” added Mr. Ryan. “Even when people have different ideas of what Fr. Moreau's vision is or how this should look in the world today, the genuine desire for the good of the Congregation, the Church, and the world is there. Even though participants are here from around the world the strong sense of Holy Cross community is present. As has been my experience in the United States, and last summer in East Africa, this is particularly the case when we share a common table - at meals and at the Eucharist.”

Just as the young religious draw inspiration from their older brothers in Holy Cross, the presence of these young religious, with all their enthusiasm for the Congregation’s future, is one of the many great signs of hope at the 2016 General Chapter, as it continues to discern how God is calling Holy Cross to mission today.

Without a doubt, it is this hope that unites everyone at the 2016 General Chapter. 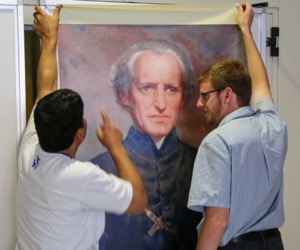 “Despite the great diversity that exists in the Chapter, I find that there is a great spirit of unity, of brotherhood, and of family as religious in Holy Cross,” said Fr. Icemick. “I believe our founder, Fr. Basile Moreau, would be very happy to see us this way.”

“So far what has caught my attention is our diversity in the Congregation of Holy Cross, and above all the search for union and a fraternal living in the midst of our international diversity,” added Br. Pereira. “In our moments of prayer and reflection in the Chapter, the harmony that we nourish and cultivate in Jesus Christ is very visible. Jesus has called us strongly these days to strengthen ourselves in what unites us so as to better follow him and serve the will of God, the Father.”