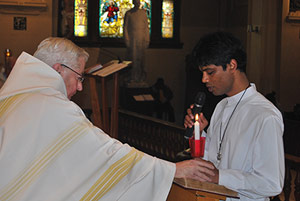 On March 20, following the Feast of St. Joseph, Mr. Thomas Xavier Gomes, C.S.C., made his Profession of Final Vows at the Oratory of St. Joseph in Montreal, Canada. Receiving Gomes' vows was Rev. Richard V. Warner, C.S.C., Superior General of the Congregation of Holy Cross.

The Mass was held in the Crypt of the Oratory. Rev. Jean-Pierre Aumont, C.S.C., Superior of the Canadian Province of Priests and Brothers, presided, and Rev. Claude Grou, C.S.C., the Rector of the Oratory, preached.

Gomes is a member of the Congregation's Sacred Heart Province, which is headquartered in Dhaka, Bangladesh. Gomes has been been in Canada for four years doing his theological studies, which he will finish in May and then be ordained to the deaconate in June. 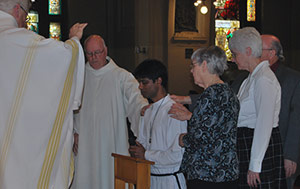 Following the completion of his studies and his ordination, Gomes will be a part of the pastoral staff at the Oratory, which already includes Holy Cross religious from Canada, India, Haiti, and the United States. The Oratory receives over two million pilgrims each year, coming from all over the world. It was built by St. André Bessette, the "Miracle Man of Montreal" and the Congregation's first canonized saint.

Visit the website of the Oratory of St. Joseph