The Board Examination Results announced on May 17, 2013, by the Indian Council for School Education added another feather in the cap of Holy Cross School in Agartala, Tripura. They also showed the fruits of the Congregation of Holy Cross’s concerted efforts to expand access to quality education for North East India’s tribal population as well. 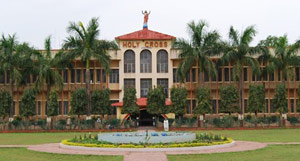 The even greater news for the Congregation and the school, which has long been seen as the premier school in the state, was the fact that some of the students with the highest scores were from the tribal population of Tripura.

While congratulating the students, Rev. Kanikkai Jayaraj, C.S.C., the Principal of Holy Cross School, said, “It was the hard work of our faculty members and the great cooperation of the guardians that enabled the students to achieve this extraordinary result, true to the tradition of Holy Cross.”

Visit the website of Holy Cross School in Agartala 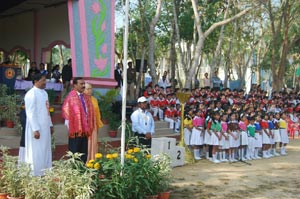 Such an achievement would have been seen as unimaginable just a decade ago. At that time, most of the students at the school came from the majority population, and prospects for expanding enrollment among tribal students appeared untenable given the volatile political situation.

The Congregation in North East India, however, resolved to be at the service of the most vulnerable, and the tribal people have long been one of the most disadvantaged groups in the region. This firm commitment of the Congregation, coupled with the improving political situation, has led to this milestone achievement.

“This great news came on the occasion of the tenth anniversary of the establishment of the Congregation’s Province of North East India,” said Rev. Roy Paul Thalackan, C.S.C., who served as the first Provincial Superior of the new Province and now is the Second General Assistant of the Congregation. “Our Constitutions invite us to direct our ministries in a preferential way to the poor and to those who are less cared for. Providing the best education to everyone who seeks the Holy Cross way of education, especially the afflicted, has been our hallmark. This achievement is a great joy for Holy Cross worldwide.”

In addition to Holy Cross School in Agartala, which was established in 1972 and now has an enrollment of over 5,000 students, the Congregation also runs 12 other educational institutions in North East India, all of which mostly cater to the disadvantaged sections of the population.

In 2009, The Congregation has also established Holy Cross College in Agartala, which laid the foundation stone to its new building on December 12, 2012. It is both the only Catholic college and the only English-medium college in the state of Tripura.