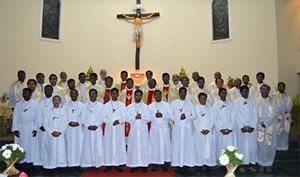 On February 7, at Christ the King Church, Sainikwadi, in India, 12 seminarians in the Congregation of Holy Cross made their Final Profession of Vows. The following day, they were all ordained deacons by the Very Rev. Valerian D’souza, DD, Bishop Emeritus of Diocese of Poona, in a Mass held in Papal Seminary Chapel at Jnana-Deepa Vidyapeeth, the Pontifical Institute for Philosophy and Religions in Pune.

Both celebrations were witnessed by the parents, brothers and sisters, close relatives, and spiritual directors of the 12 men. There were also special festivities that followed each liturgy. 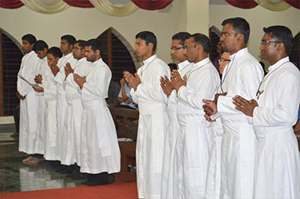 “The Final profession and Ordination to diaconate is a happy moment for all of us in India. It is a sign of hope for us as 12 men dedicate their life to God through the Congregation of Holy Cross," said Fr. K.J. Abraham, C.S.C., Superior of the Province of North East India. "These men stand as a symbol of vibrant church in India and of the Congregation. The mission area needs more and more young men to carry out the work of evangelization through our special charism of teaching, healing, and praying. I congratulate these young men for their bold step to say yes to God.” 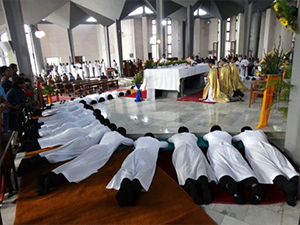 Of the 12 men who took Final Vows, six of them are members of the Province of North East India (Argatala, Tripura); four belong to the Vicariate of Tamil Nadu (Trichy, Tamil Nadu); and two are part of the Province of South India (Bangalore, Karnataka). All 12 of them are currently in their Third Year of Theology at Jnana-Deepa Vidyapeeth. They live at the Holy Cross Major Seminary, which is located in walking distance of the Pontifical Institute.

Fr. Fr. Leo D’souza, C.S.C., Superior of South India Province, presided at the Mass of Final Profession, and Fr. Fr. Justin Diraviam, C.S.C., Superior of the Vicariate of Tamil Nadu, preached. They each received the vows of the men from their respective jurisdictions, while Fr. Suresh Kagoo, C.S.C., was sent by the North East Province as its delegate to receive the vows of its seminarians. 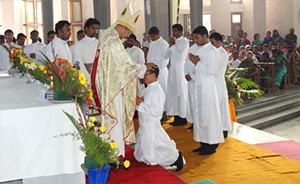 Following their Final Professions and Ordinations, these men are continuing their Fourth Year of Theology at Pune until September 2014, when they will be assigned to particular ministries by their respective superiors.

“It’s my joy to communicate with you the event of 12 of our seminarians making their final commitment in Holy Cross from India and their Ordination to Diaconate, said Fr. Jimmy Mathew, C.S.C., the Rector of the Holy Cross Major Seminary in Pune. “It’s a wonderful and fulfilling experience for me as I accompany them towards their last stage of their formal formation as young adult religious of Holy Cross.”

Although the Congregation has been growing rapidly in India, including seven Final Professions and Ordinations in 2013, this influx of 12 new laborers for the vineyard is a great sign of hope for the Holy Cross mission not just in India, but around the world.

"In the Vicariate of Tamil Nadu, we are very happy to welcome these four young religious to join us in the ministry of Holy Cross," said Fr. Diraviam. "Their Professions and Ordinations open a door for the expansion of our ministries within the Vicariate and to positively answer the call from the Generlate to send confreres to work in the congregational patrimonies abroad. It will make us truly international,"