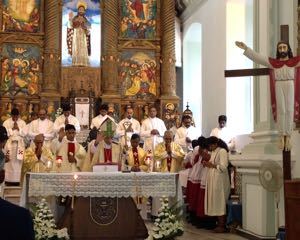 On October 22 and 23, the Congregation of Holy Cross celebrated the priestly Ordinations of two members of the Province of South India (Bangalore, Karnataka). Fr. Terence Abranches, C.S.C., and Fr. Sydney Dias, C.S.C., were ordained by the Most Rev. Filipe Neri Ferrao, Archbishop of Goa and Daman.

Both of the newly ordained are from Goa, making them the first men from the archdiocese ordained priests for Holy Cross in 22 years. The timing of their Ordinations is providential as the Congregation recently constucted a minor seminary in Goa. 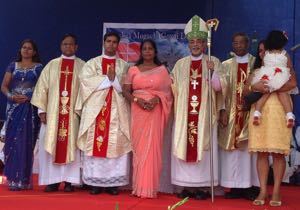 “It was a touching moment to witness the two Ordinations in a prayerful atmosphere that gladdened and inspired the hearts of all present,” said Fr. Shiju Joseph, C.S.C., a member of the Province of South India. “It is a great blessing to have two priests ordained from Goa in the same year.”

Fr. Terence’s Ordination took place on Wednesday, October 22, at Salvador Do Mundo Parish in Saloi, Bardez Goa. He chose “Called to Serve in Love” as the theme for his ordination. Fr. Terence will now join the Holy Cross community in Mumbai as an assistant parish priest.

Fr. Sydney was ordained the following day, Thursday, October 23, at Holy Cross Church in Quepem, Salcette Goa. “To Witness Christ’s Love” was his chosen theme for his ordination. Fr. Syndney will now serve as the Vocation Facilitator for the Congregation in Goa and work as Assistant Rector at the new minor seminary there.

View a gallery of Holy Cross Ordinations from around the world

The Ordinations of Fr. Terence and Fr. Sydney kick off a series of Ordinations for the Congregation in India. Fr. Terence and Fr. Sydney were part of a Final Vows Class of 12 for Holy Cross in India on February 7, 2014. Their 10 classmates, six of whom are members of the Province of North East India and four of whom come from the Vicariate of Tamil Nadu, will be ordained over the next two months.