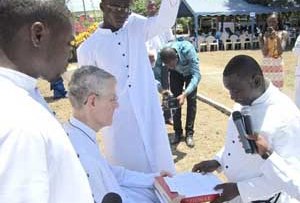 On Saturday, April 27, people came from across Ghana to join the Congregation of Holy Cross gathered at the Holy Cross District Center in Brafoyaw for the celebration of Final Vows of two Ghanaian brothers.

Br. Augustus Mensah, C.S.C., and Br. David Kpobi, C.S.C., both made their Final Professions during a beautiful outdoor Mass at which the Most Rev. Matthias Nketsia, Archbishop of Cape Coast, Ghana, presided and preached.

Receiving Mensah and Kpobi’s vows of poverty, chastity, and obedience according to the Constitutions of the Congregation of Holy Cross was Br. Chester Freel, C.S.C., the Superior of the Midwest Province of Brothers. The Congregation’s District of West Africa, which serves Ghana, is a part of the Midwest Province. Br. Daniel Dardoe, C.S.C., the District Superior, participated in the liturgy as well. 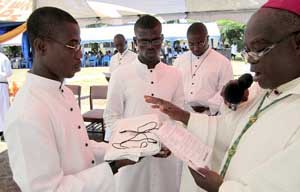 As a sign of their Final Profession as religious brothers in the Congregation, Mensah and Kpobi received a St. Joseph Medal. Going back to their original founding as the Brothers of St. Joseph by Rev. Jacques Dujarié, the Holy Cross Brothers look to St. Joseph as their patron and model. Moreau further consecrated them to St. Joseph as part of his vision to model Holy Cross on the Holy Family.

Learn more about the Congregation's patrons 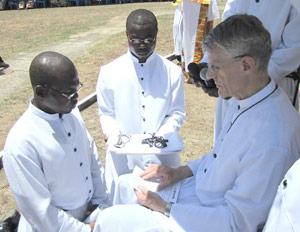 In addition to the presence of many family and friends of the Mensah and Kpobi, a full complement of the Holy Cross family was present, including brothers, sisters, and priests.

Following the festive Mass, a large celebration took place on the District Center’s grounds, complete with a meal and plenty of music, drums, and dancing.

Whatch videos of Final Professions Around the World