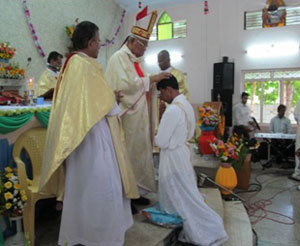 Earlier this month, on October 19, Rev. Gnanapragasam, C.S.C., became the first priest ordained for the Vicariate of Tamil Nadu, which is headquartered in Trichy, India. The Vicariate was established by the 2010 General Chapter of the Congregation of Holy Cross because of the growth of vocations in India and the diversity of languages and cultures represented and served by the Congregation in the country.

Fr. Gnanam was ordained at St. Sebastian Church in Somarasampet, where he began his journey in Holy Cross. The Most Rev. Antony Devotta, DD, Bishop of Trichy, was the presiding and ordaining bishop.

Following his Ordination, Fr. Gnanam celebrated a Mass of Thanksgiving in his birthplace where the parishioners joyously welcomed him with their traditional customs. It was a celebration to be seen. 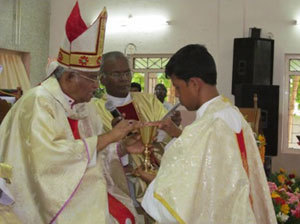 “Since it was the first ordination of the Vicariate of Tamil Nadu, confreres from the other Provinces and Vicariates of India attended these functions in large numbers and made us proud,” said Rev. David Adaikalam, C.S.C., Principal of Holy Cross Matriculation School, Somarasampet. “We continue to pray for Fr. Gnanampragasam, for his meaningful and dedicated ministry in and through the family of Holy Cross.”

Fr. Gnanam was born on May 1, 1984, to Mr. Uthiriaraj and Mrs. Josephinmary in Aloysious Parish, Gosavapetti, in the state of Tamil Nadu. He has two elder sisters and a younger brother. 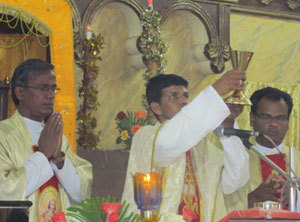 In 1999, after 10th grade, Fr. Gnanam joined the formation program at Somarasampet. He completed his Novitiate and professed First Vows on May 31, 2007. After obtaining his Bachelor’s Degree  in Philosophy, Fr. Gnamam was sent to Holy Cross School, Ghanpur Station, for a year of pastoral work. He then went to Jnana Deepa Vityapeet, Pontifical College in Pune for his theology. He successfully completed his theological studies and was ordained a deacon on February 8, 2013. For his diaconal ministry, he served at the Congregation’s parish in Kuthenkully.

Learn more about the work of Holy Cross in India

The motto that Fr. Gnanam chose for his religious life is “with you always” (Mt 28:20). He said the motto speaks of his desire to dedicate his life and ministry for the People of God in and through the family of Holy Cross.