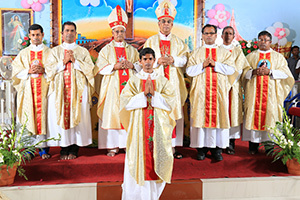 Over the last several months of 2014, four members of the Vicariate of Tamil Nadu in India were ordained priests for the Congregation of Holy Cross. As the ordinations were held separately in the men's hometowns, the Congregation hosted a celebration this past Sunday, January 11, 2015, to celebrate all four newly ordained priests. They are Frs. Pascal Selvanathan, C.S.C., Amalraj R., C.S.C., Selvaraj A., C.S.C., and Jayaraj S., C.S.C.

The January 11 celebration included a special prayer dedicated to the newly ordained followed by a social and dinner that were attended by many Holy Cross religious.

Read news of other ordinations in the Congregation

"The Vicariate of Tamil Nadu has a steady growth in its number of priests, men in formation, and ministries," said Fr. Justin Diravaim, C.S.C., the Superior of the Vicariate. "This Vicariate has potential for providing more vocations to the entire Congregation of Holy Cross who can cross borders of every sort. This is exemplified by four of our personnel presently working in other sectors of the Congregation, including the Generalate." 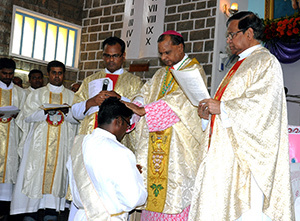 The first of the four men to be ordained was Pascal. His ordination took place on August 9, 2014, in his hometown of Martalli. He was ordained by the Most Rev. Peter Abir Antonysamy, the Bishop of the Diocese of Sultanpet. Pascal is working as the steward and administrator at Holy Cross School in Palani, which just opened in June 2014.

The next to be ordained by Amalraj on November 22, 2014, in his hometown of Dharmapuri. The ordaining bishop was the Most Rev. Malayappan Chinnappa, the Archbishop Emeritus of the Archdiocese of Madras and Mylapore. Amalraj is currently working in the Vicariate's Administrative House in Woraiyur in the state of Tamil Nadu.

One week later on November 29, 2014, Selvaraj was ordained by the Most Rev. Susai Manickam, the Bishop of Sivagangai. The ordination took place in his home parish of C.K. Mangalam. Selvaraj is currently working as the Assistant Vocations Promoter for the Vicariate. 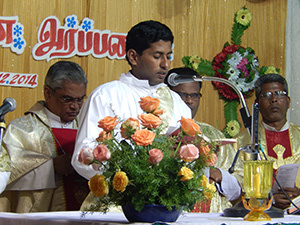 The last to be ordained was Jayaraj, and his ordination took place just three weeks ago on December 27, 2014, in his village of Savariyar Samuthiram. The ordaining bishop once again was Bishop Manickam. Jayaraj is now working as the steward and administrator of the Congregation's school in Vakkampatty, which has over 1,000 students.