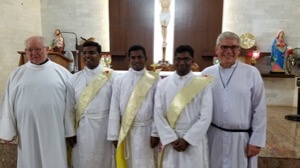 The Congregation of Holy Cross shares in the joy of the Vicariate of Tamil Nadu on the Final Professions of three of their religious on September 21, 2018. The three newly finally professed are: Mr. Antony Cheliyan Savariraj, C.S.C., Mr. John Kennedy, and Mr. Jesu Manickam, C.S.C.

The Mass was held at St. Peter and Paul Church in Arriyanellur, which is a parish administrated by the Vicariate.

This was the first time in the history of Holy Cross in Tamil Nadu that a Final Profession ceremony and Diaconate Ordinations were held in the region. In years past, these ceremonies were usually conducted in the Holy Cross Seminary in Pune at the end of the men’s theological studies. Part of the motivation of shifting the Final Vows Mass to the region was for the promotion of vocations and the mission and Holy Cross.

The presider at the Mass, which was well attended by community, family, and friends, was Fr. Justin Diraviam, C.S.C., who at the time was the Superior of the Vicariate. In the name of the Congregation, he also received the Religious Vows of the three men.

Fr. A. Sahayaraj, C.S.C., was the homilist for the Mass. He preached on the theme of "being in the light of Christ.” He said that religious are called to walk in the path of light through the evangelical vows, carrying the torch by the way we serve humanity and the Church

A festive lunch and reception were held after the ceremony at the campus of the nearby Holy Cross school. 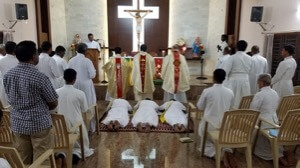 Four days later, on September 25, the three were ordained during the Chapter of the Vicariate, which took place at Moreau Illam in Trichy. The Most Rev. Thomas Paulsamy, Bishop of the Diocese of Dindigul, came to celebrate the Mass of the Ordination, which was held in the Moreau Illam’s chapel.

Following the Mass, the newly ordained were congratulated by their confreres in Holy Cross with a felicitation, social, and meal. 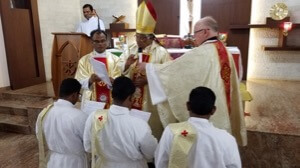 All three of the newly ordained deacons were placed in Holy Cross-run parishes for their diaconate ministries: Deacon Antony Cheliyan Savariraj is serving in the newly erected parish of Melakovilpatty in the Archdiocese of Madurai under the guidance of Fr. Jayaraj, C.S.C.; Deacon Jesu Manickam is working in Sendharapatty in the Dioces;e of Salem under the guidance of Fr. Pascal, C.S.C.; and Deacon John Kennedy is serving in Matiyarendal in Diocese of Sivagangai under the leadership of Fr. Amalraj, C.S.C.

Special thanks to Fr. Justin Diraviam, C.S.C., for his assistance with this article.