The Office of Vocations of the United States Province of the Congregation of Holy Cross released a new video showcasing Final Profession and the religious vows of poverty, chastity, and obedience taken by Holy Cross priests and brothers as part of their commitment to God in service of the Church and the world.

"We are excited about how well the video came together," said Fr. Jim Gallagher, C.S.C., the Director of the Office of Vocations. "It is able to give a look into our life as consecrated religious. It is a look into our understanding of God's love at work in our life, our common prayer, and our ministry, as well as the life that we share with one another in community and with the people of God." 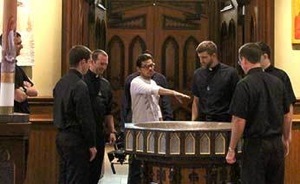 To oversee and direct the project, Fr. Gallagher connected with C. M. de la Vega, a young film maker in Los Angeles who has done work with Holy Cross Family Theater. According to Fr. Gallagher, de la Vega "understood what we were trying to do and really helped to bring this idea to life in a stunning and compelling way." De la Vega was assisted by Rudolpho Zalez (Cinematographer and Director of Photography), Stephen Holliger (On Set Recording Engineer), and Miles M. Davis (Post Production Sound Engineer/Mixer).

Filming for the video began in the spring of 2014 with interviews of the six men taking Final Vows. Footage was then added this past month of their Mass of Final Profession, which took place September 13, 2014, in the Basilica of the Sacred Heart on the campus of the University of Notre Dame in Notre Dame, Indiana.

"They helped us tell the story by using their own words to describe what the vows were about, what drew them to Holy Cross, what they were excited about, and how they knew that this is God's call in their life," said Fr. Gallagher.

The video supports Pope Francis' directive to the Universal Church to celebrate the Year of Consecrated Life, which begins on November 30, 2014, the First Sunday of Advent, and culminates with the World Day of Consecrated Life on February 2, 2016.

"It is providential that the video is was able to come together on the cusp of the Year of Consecrated Life," added Fr. Gallagher. "We are excited about the ability to offer this video as a resource to help open up the beauty of the Consecrated Life and hopefully inspire young men and women to seek out the opportunities to ask if the Lord is inviting them to consecrate their lives in a similar way."